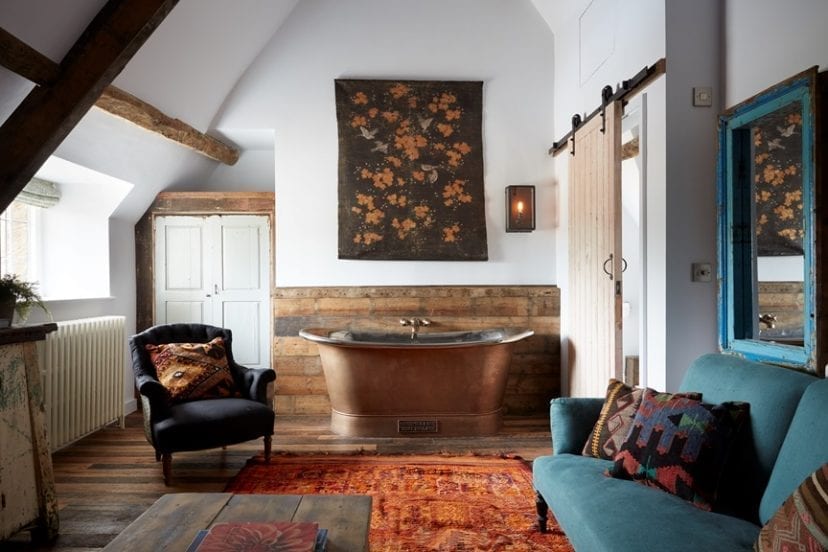 Stride across the rolling Cotswolds hills, wander through ancient Oxford colleges, shop for organic food and designer clothes, then retreat to one of these boutique hotels in Oxfordshire, selected by The Good Hotel Guide.

1. Artist Residence Oxfordshire, South Leigh
The latest addition to Justin and Charlotte Salisbury’s eclectic Artist Residence collection is also one of the new entries in the 2018 Good Hotel Guide. Ten miles from Oxford, Artist Residence Oxfordshire is as proudly rural as its sister hotels in Brighton, London and Penzance are coolly urban. The 16th-century thatched farmhouse has been refurbished and revamped in the collection’s signature style: bohemian flushes, reclaimed pieces and modern luxuries against a backdrop of original features including flagstone floors, exposed brickwork and a huge fireplace. The five quirky bedrooms up in the eaves have beams, wooden floorboards, eclectic artwork and a mini-fridge stocked with local goodies.

Perfectly placed for: Walks in the Cotswolds and shopping for tasty goodies at Daylesford Organic Farm.

2. Old Parsonage Hotel, Oxford
Bookworms will love this five-star hotel just a few minutes from Oxford city centre. It’s a luxurious blend of old and new, with quirky modern portraits lining the 17th-century walls. The library on the first floor has a well-considered section about Oxford and its history, and each of the sleek bedrooms contain a bedside booklet of short stories, each a winner of the owner’s Jeremy Mogford Prize for Food and Drink Writing. It would be too easy to spend your days here reading, slipping out through the sliding doors for a drink on the terrace or taking afternoon tea in the walled garden. Good thing, then, that the hotel offers free vintage-style bikes to encourage guests to get out and about in Oxford.

Perfectly placed for: tours of Oxford’s colleges and Mediterranean food and wine in the hotel’s sister restaurant Gees, just up the road.

3. Burlington House, Oxford
This B&B, in a leafy suburb just a 10-minute bus ride from Oxford city centre, dishes up breakfasts the critics rave about: freshly squeezed coffee and freshly ground coffee, home-made granola and yoghurt, home-baked bread, gruyere cheese omelettes and the house speciality – a marmalade omelette, which tastes far better than it sounds! It’s a five-star place that is consistently rated highly, but what really sets it apart is the friendly host, Nes. The 12 rooms are a little on the snug side, but stylish and spotlessly clean – hotel standards for B&B prices, with thoughtful touches.

4. The Feathers, Woodstock
There are plenty of reasons to book a room at The Feathers, but the 400-plus gins in the Gin Bar is certainly near the very top of the list. It’s earned The Feathers a spot in Guinness World Records, as well as The Good Hotel Guide. The hotel is equally well stocked with character. If you’re a fan of right angles and uniformity, steer well clear – The Feathers is formed from a row of diverse buildings, meaning the 21 individually styled bedrooms (split into no fewer than five categories) are reached by winding staircases, which only adds to the sense of privacy, intimacy and quirkiness.

5. Old Bank, Oxford
You can’t get more central than Old Bank hotel, owned, like Old Parsonage, by the hands-on Jeremy Mogford. It’s located on Oxford High Street in three converted stone buildings, and yes, the hotel’s name is as straightforward as it sounds – it used to be a bank, and the past riches live on in this luxury hotel. The historic building has been brought bang up to date with marble bathrooms and Nespresso machines in the 42 bedrooms, and modern art from Mr Mogford’s remarkable private collection throughout. Make time for a drink at the sleek bar in white onyx and dinner at the popular restaurant, which sources many of its specials from Mr Mogford’s Oxfordshire farm.

Perfectly placed for: The Bodleian Library, Radcliffe Camera and All Souls College are just across the road.

6. The Swan Inn, Swinbrook
The ancient Swan Inn is utter Cotswold perfection. It’s next to the sprightly River Windrush on the edge of a honey-hued village – there are even picnic tables next to the water in the garden – and sheep-dotted fields and dry-stone walls roll out in every direction. Wisteria blooms over the doorway in spring, chickens roam the garden, and in winter a wood-burning stove burns in the restaurant, where the menu brims with local produce, such as Cotswold longhorn sirloin steak or Windrush goat’s cheese. Book one of the five recently added riverside bedrooms to wake up to the tinkling sounds of the river in the morning.

Perfectly placed for: Messing about on the river and long walks through the Cotswolds.

This selection is from The Good Hotel Guide’s best hotels in Oxfordshire. www.goodhotelguide.com/hotels-in-oxfordshire