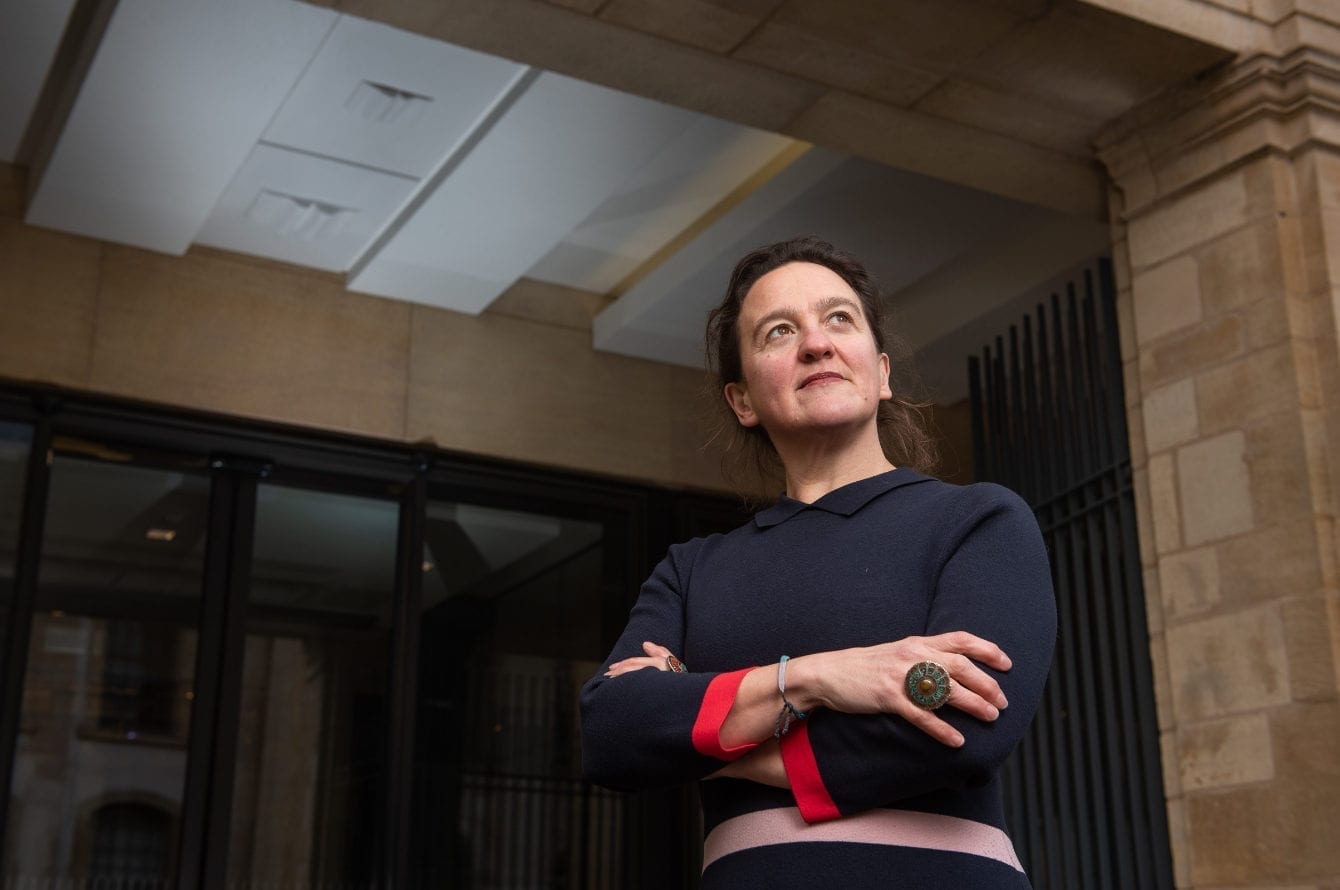 Titled The Space of Reading, the permanent commission is a sculpture created from casts of 21 open books and has been installed above the public entrance of the Weston Library.

The artwork was unveiled on 29 January and was commissioned by the Bodleian Libraries with funding from Art Fund and the Henry Moore Foundation. The work has been installed in the ceiling of the colonnade on the south side of the Weston Library, located at the Library’s public entrance on Oxford’s historic Broad Street.

The Weston Library opened to the public in 2015 following a three-year renovation of this 1930s Giles Gilbert Scott building by WilkinsonEyre architects. It is now the Bodleian’s Special Collections library and includes a stunning visitor space with exhibition galleries, a lecture theatre, café and shop.

The Space of Reading focuses on the physical presence of the book and alludes to the diversity and richness of the Libraries’ collections, which include more than 13 million printed items. Kovats drew inspiration from the ceiling of Duke Humfrey’s Library, the oldest reading room at the Bodleian Libraries. The sculptures were cast from actual books taken from Kovats’ personal collection of books, mainly books she read with her son.

“It was the flying books on the panelled ceiling of Duke Humfrey’s Library that were the starting point for this work – I found these completely magical. I saw them on the same day that I was given a tour of some of the treasures of the Bodleian’s collections when I saw first-hand things like fragments of papyrus with Sappho’s poetry. These completely blew my mind.

“The Space of Reading is inspired by the idea of what is housed in the Bodleian – more than a single brain could ever assimilate. And yet there is still more to be said and written and understood. So this work is about some specific books but also about the future books that will be written in the Bodleian Libraries.”

“The Weston Library is a space where the historic and the contemporary come together so we’re delighted that Tania Kovats’ new artwork creates a new ‘way in’ to the building, inviting visitors to explore the Bodleian Libraries’ historic collections. I hope visitors will look up as they enter the building and be inspired by this fantastic new work.”

“We are pleased to support the commission of Tania Kovats’ subtle intervention which seamlessly captures both the rich history of the Bodleian as well as its purpose today as a space for everyone who finds joy in the book.”

Kovats gave a public lecture about her work on 29 January at the Weston Library, and on 26 January the Bodleian held a special day of workshops and tours celebrating the role of art in the Libraries.

The Space of Reading’s focus on the physicality of the book reflects the Libraries’ strengths in research and teaching around the book as object. In particular, the Centre for the Study of the Book promotes scholarship in this area through a Visiting Fellows Programme, research projects, training courses and events, and the Libraries’ Heritage Science teamuses high-tech scientific techniques to uncover new details about treasures in the Libraries’ collections, such as what an object is made of, how it was made, and revealing hidden text and other features.

In its 400-year history, the Bodleian has a long tradition of art in the Libraries. In addition to the written word, the Libraries holds significant collections of works of art and photography, including more than 300 drawings, paintings and prints as well as 50 works of sculpture, antique furniture and historic printing presses. The Libraries also have a long history of commissioning new arts and crafts, with precedents including painted ceilings and friezes, portraits, decorative glass, gargoyles, ironwork and in-built furniture.

In addition to Kovats’ latest work, visitors to the Weston Library can see other artistic features inside the building. These include the Sheldon tapestry Map of Worcestershire, a huge, beautifully woven map created in the 1590s, and the Ascott Park Gateway, which was created in the late sixteenth-century for the Ascott estate in Oxfordshire and is now on long-term loan to the Bodleian Libraries from the V&A.

Since opening in 2015, the Weston Library has proved hugely popular with readers, scholars, local residents and visitors from around the world and has won a string of architecture and design awards. The Library hosts an extensive programme of free exhibitions and displays, lectures and events, and attracts, on average, more than 750,000 visitors each year. Forthcoming exhibitions in 2019 include Babel: Adventures in Translation opening on 15 February, Thinking 3D: From Leonardo to Present opening on 21 March, and Talking Maps on 5 July.

In addition to exhibitions showcasing the Libraries’ own collections, recent displays by contemporary artists have proved a major draw to the Library. These have included Cornelia Parker’s Magna Carta in 2015 and early 2016, and a display of her Fox Talbot’s Articles of Glassseries in 2018, showcasing ninephotogravure etchings that the artist made using glassware items from the Bodleian’s archive of the 19th century photography pioneer William Henry Fox Talbot. Other recent displays include the works of renowned British photographer Martin Parr in 2017 and a display of designer bookbindings as part of the Designer Bookbinders International Bookbinding Competition in 2017.