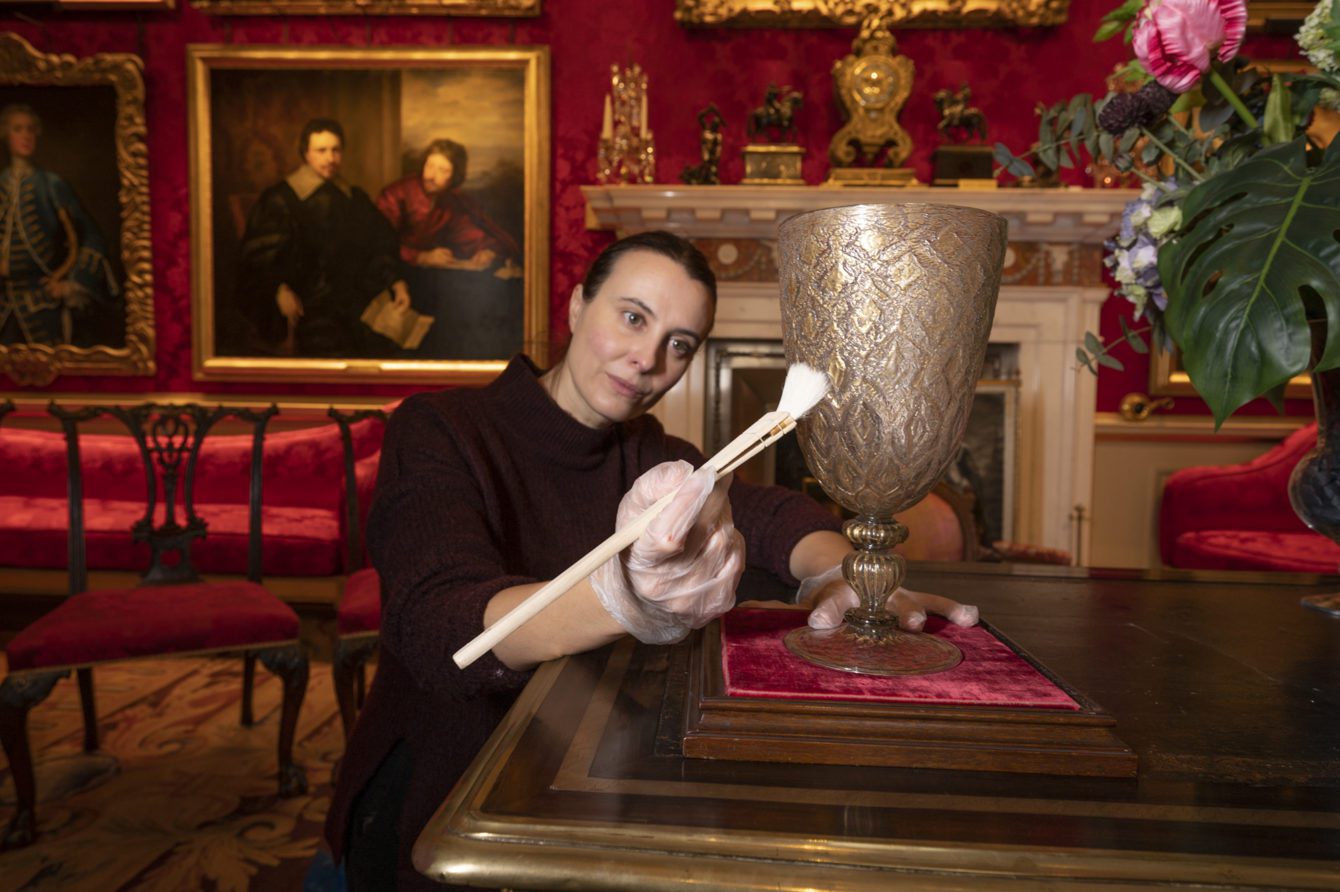 Carmen Alvarez, Deputy Collections Manager at Blenheim Palace carefully cleans an ornate goblet, reputed to have been used by the 1st Duke of Marlborough at the Battle of Malplaquet on 11th September, 1709.

The battle was the final victory in the War of Spanish Succession, which cemented the Duke’s reputation as Britain’s Greatest General and, according to his ancestor Winston Churchill ‘changed the political axis of the world’.

It was also described as the Bloodiest Battle of the 18th Century, with more than 15,000 Allied and French soldiers killed, and over 22,000 wounded, in a single day.

The catastrophic loss of life in a single day sent shockwaves across Europe and led to both sides seeking a peaceful way to end the War of the Spanish Succession, although hostilities did not finally cease until 1714.

In a letter to his wife Sarah just after battle the Duke wrote: ‘I am so tired that I have but strength enough to tell you that we have had this day a very bloody battle; the first part of the day we beat their foot, and afterwards their horse. God Almighty be praised, it is now in our power to have what peace we please.’

The Lièges façon de Venise glass goblet, which stands close to 28cms tall, is believed to date back as far as the late 16th century, more than a century before the battle at Malplaquet.

According to records it was part of a collection at a chateau used by the Duke as his headquarters during the conflict.

“Rather than something he took with him on the campaign, it seems more likely it was owned by a local dignitary and offered to the Duke as a welcome toast or celebration of victory,” said Carmen.

“The fact the glass itself could date back to the 16th century, may also suggest it was in the possession of a local family and brought out to mark significant occasions,” she added.

In a letter dated September 29th, 1888, the then Mayor of Malplaquet stated it was ‘common knowledge’ the goblet had been used by the 1st Duke both before and after the battle.

The goblet is now on public display in the Palace’s Great Hall.

The Oxfordshire UNESCO World Heritage Site is planning a series of events and a new exhibition to mark the 300th anniversary of the 1st Duke’s death.

Blenheim Palace was gifted to the Duke by Queen Anne on behalf of a grateful nation and named after the site of his most famous victory over the French in the War of the Spanish Succession.

At the time the victory was hailed as the greatest British military success since Agincourt.

The First Duke was a huge inspiration for his direct descendant Winston Churchill, who was born at Blenheim Palace and considered him to be the greatest military and political leader Great Britain has ever known.

In his four-volume biography of John Churchill he stated he was: ‘As clever at piercing the hidden designs of his enemy as in beating him on the field of battle, he united the cunning of the fox to the force of the lion.’

Set in over 2,000 acres of ‘Capability’ Brown landscaped parkland and designed by
Vanbrugh in the Baroque style, it houses one of the most important and extensive collections in Europe, which includes portraits, furniture, sculpture and tapestries.