The Colours of Summer in Hearts and Hedgerows 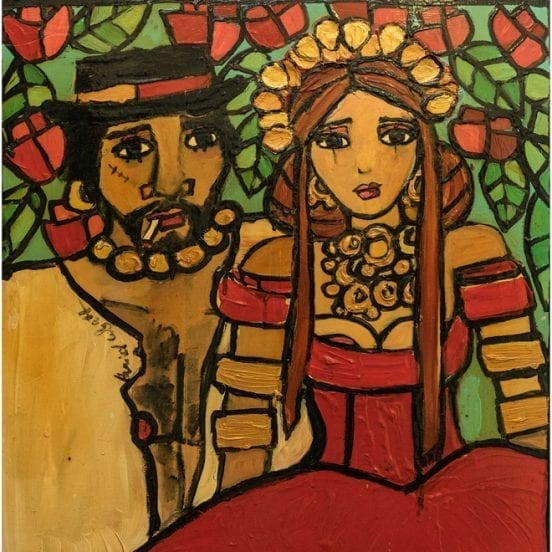 In the smart art gallery space at Burford Garden Company, feel the vibrancy of summer with colourful new work by Harriet Whyatt whose paintings are rich with the flavours of life and loves, heavily influenced by her personal experiences of the Romany gypsy people alongside whom she has lived. Stylistically her work is inspired by both the Gypsies and people who live outside the norm, for example in the circus, and the Catholic icons she was exposed to as a child.

‘My paintings cover many aspects of my own emotional response to life events. I suppose I have used painting as a catharsis over many years, allowing my own vulnerabilities to be released time and time again. Falling in love, being in love, terrified of falling in love.’

‘I was drawn to the mystery and romanticism of the Romany Gypsies, as groups of people who lived outside of society with an understanding of nature and survival, despite ongoing prejudice and abuse from the rest of society,’ she explains. Her mixed media panels are an intimate exposé of these people offering a beautiful, intense and yet intimate insight into their life, a celebration of the Roma’s individuality, strength, pride and guarded nature, and the richness and beauty of their culture.

From people to places, the Cotswold town of Woodstock, this month, is rich with strong landscapes, in both the Kyffin Gallery and the Junction Gallery.

In the Kyffin Gallery, Sussex based landscape painter Shazia Mahmood’s chromatic approach to oils captures the extraordinary light on the landscapes from the Scottish Highlands to the Sussex Coast, using layers and textures to build stunning skies, whether a resplendent blue with summer sunshine over dunes, or the dramatic reds and purples of the setting sun atop a moody sea. These hang alongside Celia Montague whose landscape paintings capture views both local and from across Europe.

The neighbouring Junction Art Gallery presents the landscape in several different mediums including work by ceramicist Paul Wearing and landscape painter Robert Newton. Robert describes his work as ‘a diary of his surroundings’ finding inspiration in the landscape around him in Northumberland and capturing all the seasons, from the rich colours of autumn to the freshness of spring. His work has an immediacy to it, emphasised by the visible brush strokes which move with purpose across his canvasses. Skilfully capturing details and subtle colours with bold, broad brushstrokes, he also demonstrates his interest in the paint as a medium as well the view he depicts. His paintings are ‘a direct response to an evolving, living landscape’ brought about by the changing seasons and the working of the land.

Similarly, the change, growth and decay within the landscape is the inspiration for Paul Wearing’s hand-built ceramic vessels. Paul uses multiple layers of glazes and slips to create richly textured, almost painterly, surfaces which, once fired, echo the textures of lichen or rust.

To see a selection of floral forms inspired by a love of the countryside, found objects and natural forms visit North Oxford, and Summertown’s Sarah Wiseman Gallery for their Botanica exhibition: here discover printmaker Vicky Oldfield’s works on paper, larger in scale than her previous collections. Fascinated with the structure and design found in flowers and plants, these are her personal interpretations of British wild flowers blown up to majestic proportions: the strength of her line and highly attuned sense of detail lends itself well to this larger scale.

‘I am incredibly lucky to be able to indulge my fascination with nature, collecting unusual objects and local plant life and use it all to make my pictures,’ she says. The prints are taken from plates which have been collaged with a variety of materials. Card, fabric, paper, string, sand and anything else that may come to hand; it’s recycling at its most creative.  The plates are then sealed and then inked up and printed in intaglio or relief on damp paper using an etching press.  The embossed textural quality of the print is unique to this method.

Recently Vicky has been asked to make two pieces of work for the Royal College of Physicians ‘Florilegium Project 2018’, to celebrate the 500th anniversary of the college, and 400th anniversary of the college’s publication of Britain’s first pharmacopoeia.  And if this interests you, and formal botanical illustration inspires you, then don’t miss the chance this month to visit a small display in the Bodleian Library on Oxford’s Broad Street where you can see a sample of illustrations by the famous botanical illustrator Ferdinand Bauer.

In the seventeenth century Bauer produced detailed illustrations of a thousand plants collected around the world, many of which were previously unknown species, and the publication of The Flora Graeca was one of the greatest botanical works ever produced, taking forty years to complete using a fascinating and extensive ‘painting with numbers’ technique.

Bauer’s extraordinary watercolours were transferred on to copper plates by experienced botanical engravers and the unprecedented quality of the original images, the engravings and the meticulous hand-colouring is clear when you see the printed version alongside Bauer’s original watercolours, treasures that have been in the Bodleian for over 200 years and a case of which are excitingly on show to the public until 9th July.

And for a stark change from natural glories, underpinned with a touch of history and looking to a bright future, at the end of the month, Modern Art Oxford presents, in the Piper Gallery, a chapter from contemporary artist Aleksandra Mir’s ‘Space Tapestry’. Inspired by the Bayeux Tapestry and the artists who depicted Halley’s Comet in 1066, it is a huge hand-drawn monochrome wall hanging which forms an immersive environment. In Space Tapestry: Earth Observation & Human Spaceflight, with slogans and satellites, the graphic and textual content of the piece questions the evolution of advanced technology in relation to our daily lives, and life beyond the colours of Oxfordshire!