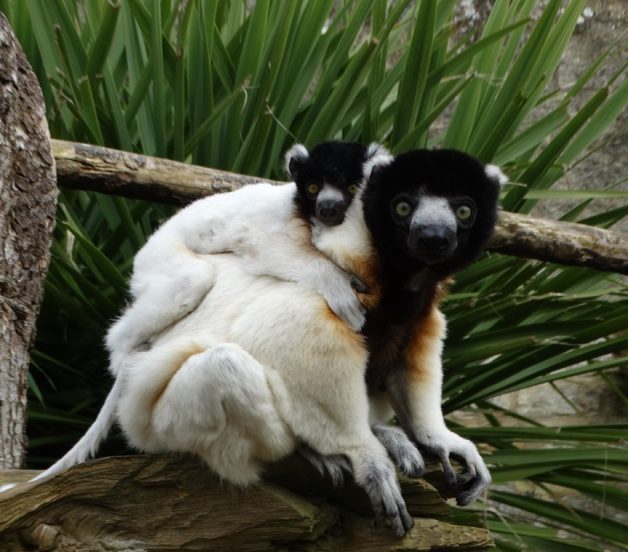 Cotswold Wildlife Park is celebrating the birth of one of its most iconic and rare Lemur species – the Crowned Sifaka (Propithecus coronatus). The baby male, named Yousstwo, is the first breeding success for new parents Bafana and Tahina and is the first Sifaka birth in the Park’s history. Cotswold Wildlife Park is the only mainland zoological collection in the UK to keep this endangered Lemur species.

Bafana arrived at the Park in 2009 from Besancon Zoo in France. Tahina joined him in 2013, from the same zoo, and the pair formed an instant bond. They are the only breeding pair in the country. Tahina is also the first hand-reared Sifaka in history to parent-rear her own offspring and is proving to be an exceptional mother.

The birth was caught on camera and available to view here. Jamie Craig, Curator of Cotswold Wildlife Park, said: “On the night of the birth, things seemed to go perfectly from the beginning. It is enormously satisfying to watch Yousstwo develop after all the effort that has been put in by keepers – including 24-hour Sifaka watch on CCTV! Tahina is proving to be an exemplary mother and our success complements the conservation efforts in Madagascar perfectly. Yousstwo is now beginning to explore his new world and we hope he will go on to be an important part of the breeding programme.”

Females are only sexually receptive for just one or two days a year, so the window of opportunity for males to father offspring is small. After a gestation period of approximately one hundred and sixty five days, females give birth to a baby completely covered in white fur and weighing roughly one hundred grams. Infants are able to grip their mother’s fur from birth and they cling onto her belly for the first few weeks of life. After eight weeks, they start to develop the distinctive darker markings the Crowned Sifaka is famous for. They become independent at around six months old.

The dedicated Primate keepers have been closely monitoring the new family. Last week, Yousstwo ventured outside for the first time and has been seen leaping from his mother’s back and exploring his new home with great vigour. Visitors can now see Yousstwo and his parents in the Sifaka enclosure adjacent to ‘Madagascar’ – the Park’s interactive Lemur exhibit.Lemurs are native to Madagascar – an ancient island in the Indian Ocean. Once joined to Africa, Madagascar has been isolated for millions of years. As a result, it has evolved an eclectic set of highly specialised wildlife – eighty per cent of which is unique to the island and is startlingly different from anything found elsewhere in the world.

Despite having only one natural predator on the island, the Fossa, many Lemur species are critically endangered. Escalating demands from human activities (such as deforestation, hunting and rapid agricultural growth) have placed enormous pressure on the island’s unique wildlife. Madagascar is now considered to be one of the world’s top conservation priorities. Habitat loss has had a catastrophic effect on Lemur populations. Timber is being smuggled out of Madagascar at an alarming rate. In 2010, custom officers at Mombasa seized 420 tonnes of illegally felled Malagasy rosewood timber* (worth an estimated $13 million), destined mostly for China. Approximately ninety per cent of the island’s forests and ecosystems had been denuded**. In addition to drastic loss of habitat, the illegal bushmeat trade threatens future Lemur populations, especially as Lemurs don’t reproduce often – or even every year. As a result, many species are on the verge of extinction and without immediate conservation efforts, will be wiped out. For this reason, in 2013, the Cotswold Wildlife Park Conservation Trust was established. Its aim is to fund vital conservation projects to preserve future generations of Madagascar’s rarest Lemurs, including the Crowned Sifaka and critically endangered Greater Bamboo Lemur.

Jamie Craig commented: “The plight of all species in Madagascar is extremely worrying and the Sifaka are now confined to tiny forest frag-ments, often in unprotected areas. We are working hard with Malagasy non-governmental organisations to protect these areas and give the species living there a glimmer of hope. The Crowned Sifaka breeding programme is pretty much unique in that it includes some of the wild population, who, in many instances, are essentially trapped by deforestation, farming practices and rising human populations. The work includes translocating certain individuals to ensure these small isolated groups maintain genetic diversity. Any birth of this species is a triumph and the research we do with the captive population is vital to the work carried out in the field.”

Jamie is heavily involved with a number of in-situ projects and is a committee member of both the Crowned Sifaka and Greater Bamboo Lemur European Endangered Species Programmes.

To highlight the plight of Madagascar’s endangered Lemurs, Cotswold Wildlife Park will dedicate May 27th – June 4th 2017 to ‘Lemur Week’. More details can be found here.

• Cotswold Wildlife Park is home to two of the rarest primate species on earth – Crowned Sifaka and Greater Bamboo Lemurs. Both are part of a European Breeding Programme (EEP). Only seven zoological collections in the world keep these species.

• Wild Crowned Sifaka population numbers are in decline. According to the International Union for the Conservation of Nature (IUCN), this species has undergone a population decline of more than fifty per cent in just the three generations.

• Yousstwo was named in honour of the Park’s original Sifaka – a charismatic male named Youssou. He was a favourite with staff and visitors and has been greatly missed since his death last year. Jamie Craig paid tribute to Youssou in the Park’s yearly magazine – Wild Talk http://www.cotswoldwildlifepark.co.uk/wp-content/uploads/CWP-WILDTALK-2017.pdf

• The name Lemur means “spirits of the dead”. Malagasy people believe them to be the spirits of their ancestors.

• The oldest dinosaur fossils ever discovered are from Southern Madagascar and date back 230 million years.