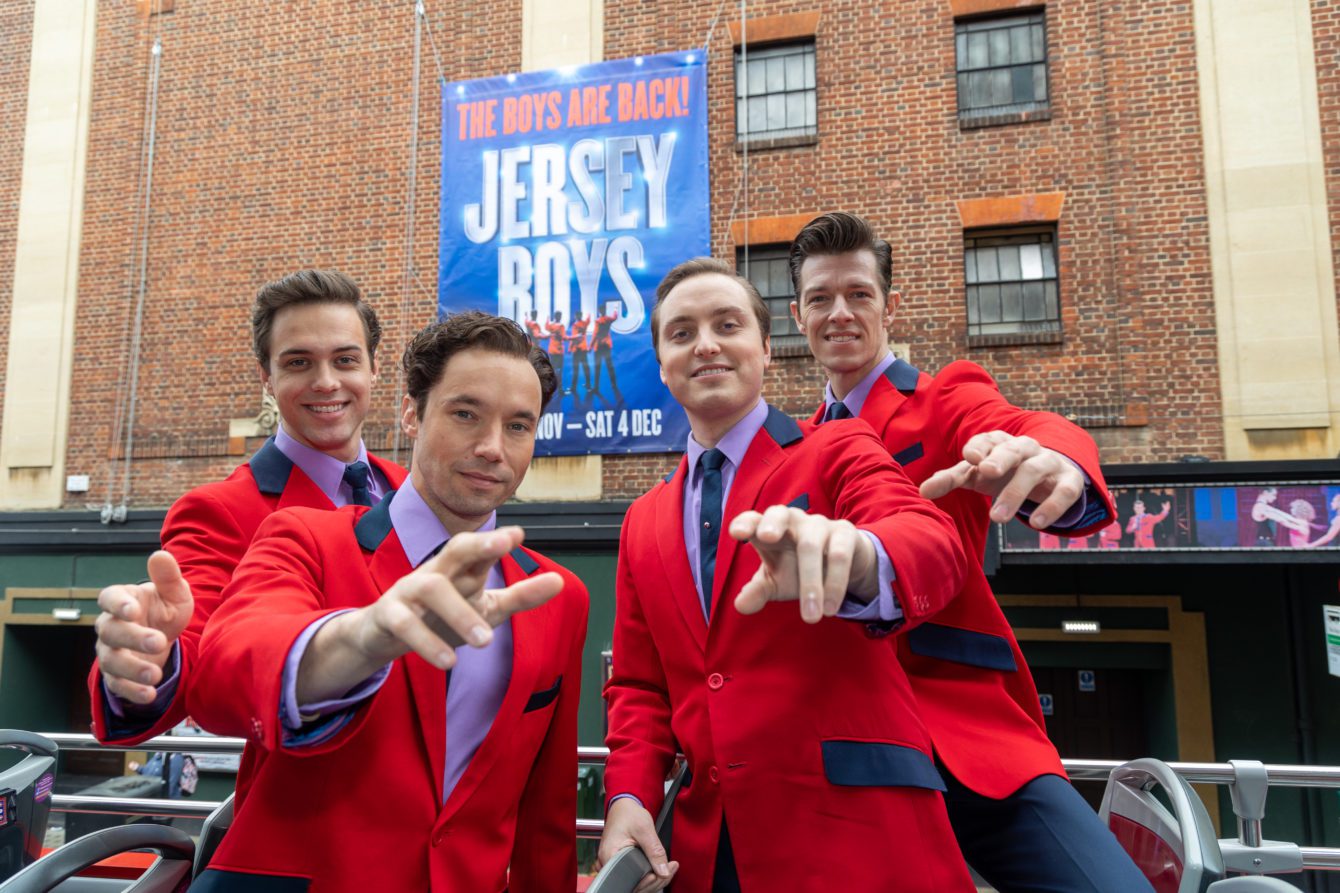 The producers and creative team are delighted to announce that in addition to the smash-hit West End production of the JERSEY BOYS will be coming to New Theatre Oxford from Tue 30 Nov – Sat 4 Dec 2021.

And the Jersey Boys are now officially in Oxford! Michael, Lewis, Blair and Dalton begun their week with an exclusive tour of Oxford’s most vibrant, historical and cultured landmarks on a City Sight Seeing bus. Dressed in the emblematic red Jersey Boys blazers, smart blue ties and stylised 60s hair, they took in the sights of South Parks Road, drove past the stunning Trinity College and stopped outside the Sheldonian Theatre. In front of this architectural landmark that sits the heart of Oxford, a sight which has been operating as a theatre for over 350 years, the boys pulled out their top Jersey Boys dance moves. A fitting backdrop for this Tony, Grammy and Olivier Award-winning musical.

Could there be a better way to introduce this iconic quartet to Oxford than to take them to an array of iconic historical Oxford locations?

JERSEY BOYS is written by Marshall Brickman & Rick Elice, with music by Bob Gaudio and lyrics by Bob Crewe. The amazing musical takes you behind the music and inside the story of Frankie Valli and The Four Seasons.

They were just four guys from New Jersey, until they sang their very first note. They had a sound nobody had ever heard… and the radio just couldn’t get enough of.

But while their harmonies were perfect onstage, off stage it was a very different story—a story that has made them an international sensation all over again. From the streets of New Jersey to the Rock and Roll Hall of Fame, this is the musical that’s too good to be true. The show is packed with their hits, including Beggin’, Sherry, Walk Like A Man, December, 1963 (Oh What a Night), Big Girls Don’t Cry, My Eyes Adored You, Let’s Hang On (To What We’ve Got), Bye Bye Baby, Can’t Take My Eyes Off You, Working My Way Back to You, Fallen Angel, Rag Doll and Who Loves You.

The JERSEY BOYS UK and Ireland Tour will be staged by the entire original Broadway creative team, led by the Tony Award-winning team of director Des McAnuff and choreographer Sergio Trujillo, with scenic design by Klara Zieglerova, costume design by Jess Goldstein, lighting by Howell Binkley, sound by Steve Canyon Kennedy and projections design by Michael Clark. The orchestrations are by Steve Orich and the music supervision and vocal arrangements by Ron Melrose. Casting is by Jill Green.

Walk Like A Man, Fast As You Can to book tickets at New Theatre box office on George Street, by ringing 0844 871 3020 or by visiting our website at www.atgtickets.com/oxford (phone and internet bookings subject to booking/transaction fee. Calls are charged at 7p per minute, plus your phone company’s access charge.).