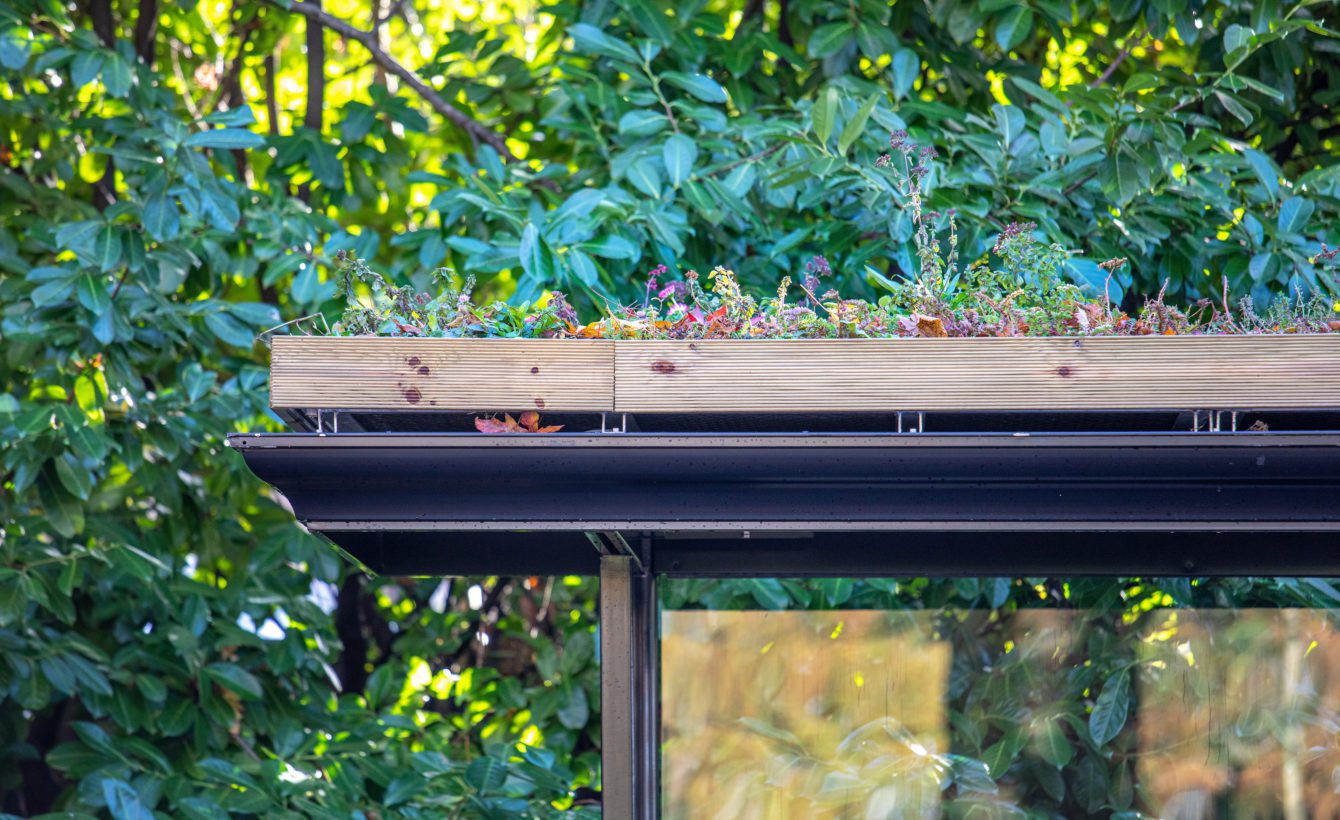 Oxford’s first Living Roof bus shelter has been installed in East Oxford, as part of work to support biodiversity across the city and enhance local communities.

The Living Roof bus shelter – also known as a ‘Bee Bus Stop’- is located on Morrell Avenue, is part of work to support native biodiversity, and to help create healthier local communities.

As well as being visually attractive, Living Roofs provide many benefits, including absorbing rainwater to avoid flooding, provide natural cooling to counteract the effects of ‘urban heat islands’,filtering fine dust from the air, producing oxygen, and providing a natural habitat for animals and plants.

The work to install the new bus shelter roof was funded and organised by ODS, as part of their work to support biodiversity, and manage street furniture across the city.

The location was selected by Oxford City Council, which owns the shelter. It was designed and installed by partner Clear Channel, who will be maintaining it for the entirely of its life-span, at no cost to the tax-payer.

The installation follows in the footsteps of other cities across the UK also installing green roof bus stops, such as Glasgow, Cardiff, Brighton and Leicester.

What is a Living Roof?

The Clear Channel Living Roof, is planted with a mix of native wildflowers and Sedum plants – ideal food sources and habitats for a wide variety of pollinating insects including solitary bees, hoverflies and butterflies.

The materials used in the Living Roof are 100% recycled or upcycled, and are fully recyclable with nothing being taken to landfill.

The Living Roof product has been assessed and verified in conjunction with The Royal Society of Wildlife Trusts, who’s independent third party ecologists have afforded it the highest significance category under Natural England’s Biodiversity Metric 3.0 of “High strategic significance”, and would make a significant contribution to delivering Biodiversity Net Gain. Find out more on the Clear Channel website.

ODS manages just over 600 hectares of accessible green space in the city and surrounding area on behalf of the City Council, including a country park, 33 nature areas and over 60 urban parks.

Oxford also has 12 Sites of Special Scientific Interest, covering 278 hectares and including four managed by the city council; Port Meadow (which has been meadowland for at least 4000 years), Wolvercote Common, Shotover Country Park, and Lye Valley Nature Reserve.

ODS also manages trees, hedgerows and shrubs on Council land, as well as most street trees.

In 2019 Oxford City Council unanimously declared a climate emergency and provided for a Citizens’ Assembly on Climate Change. Biodiversity was a key theme considered by the Assembly.

Over the past ten years, the Council has planted around 10,000 trees with the help of community groups, including two Tiny Forests at Meadow Lane Nature Reserve and Foxwell Drive.

Councillor Lubna Arshad, Cabinet Member for Parks and Waste Reduction, Oxford City Council said: “I am delighted that Oxford now has its first Living Roof bus shelter in East Oxford. Supporting local biodiversity and habitats can happen on a large scale, or small, and these bus shelters are a clear example of combining urban living with nature and local communities. I am looking forward to seeing shelter bloom in the coming months.”

Sophie Hearn, Head of Infrastructure, ODS, said: “ODS is pleased to have been able to play a key role in delivering Oxford’s first living roof bus shelter. We are proud to have played a part in enhancing the environment and to contributing toward a zero carbon Oxford. We look forward to seeing how the shelter copes through the seasons. This could be the start of something very good.”

Will Ramage, Co-Managing Director, Clear Channel, said: “It’s wonderful to see another of our ‘Bee Bus Stops’ being installed in Oxford. Even in an already leafy and green city, our Living Roofs can bring real, tangible benefits. I’m looking forward to seeing more of them in the most urban and densely populated corners of the city, where they would be valued most.”

Photos of the Living Roof Bus Shelter can be found here: https://we.tl/t-YXej6Jje8v