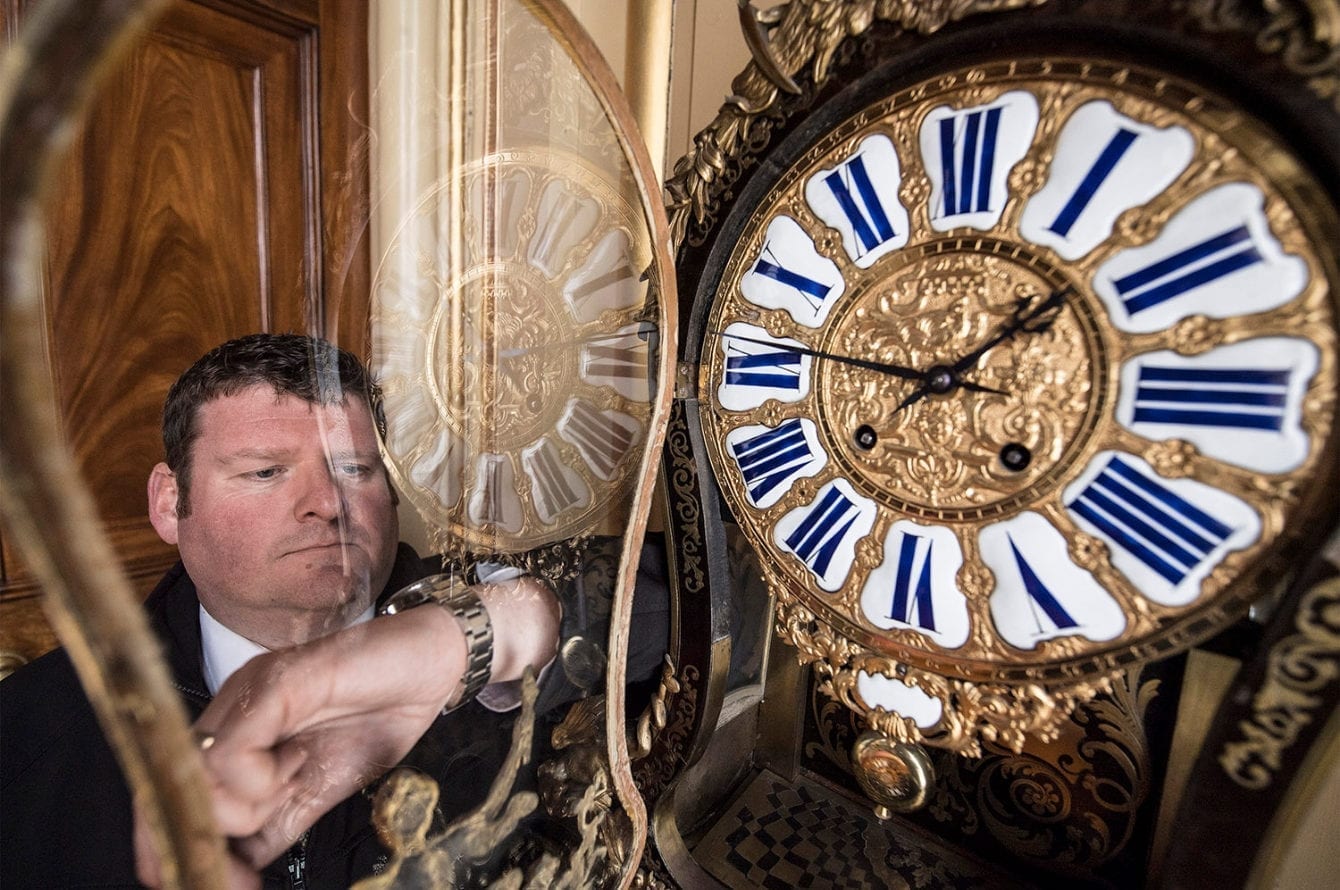 Julian Newman, Blenheim Palace’s official timekeeper, is gearing up for the challenge of changing 30 historic clocks ready for daylight saving time to end at 2am on Sunday, March 31st.

Among the priceless antique timepieces, he’ll need to change is the 18th century East Courtyard Clock Tower, which is twice as old as Big Ben.

Julian has been keeping time at Blenheim Palace for over 12 years; and the ‘horophile’ has the delicate job of changing all the clocks twice a year, alongside his other duties of maintaining and repairing the rare timepieces.

“When the clocks go back it is a case of stopping each clock then going back exactly 60 minutes later and restarting them up again,” said Julian.

“I find it best to do this very early in the morning before the staff arrive as you can easily get tied up with other events and the last thing you want to do is lose track of the time,” he added.

Among Julian’s favourites are a trio of grandfather clocks which are also located in the Great Hall; one of which chimes every quarter hour.

“I am fascinated by the intricate mechanisms within this particular clock. When I open the door to wind it you can see the weights for each of the three chimes and the pendulum in full working order.

“in 2018 the Boulle pedestal timepiece in the third State Room was taken away for repair and we discovered the original winding key hidden all the way at the bottom of the casing. It has probably been there for at least 50 years,” he added.

One of the oldest clocks to be changed is the East Courtyard clock tower, which is twice as old as Big Ben, and made by Langley Bradley in 1710.

There has never been any excuse for lateness at Blenheim Palace. The 4th Duke of Marlborough introduced ‘Blenheim Time’, which continued right up until the 19th Century, when Greenwich Mean Time became universally adopted.

His Grace was a significant amateur astronomer, and a close friend of King George III, who himself had a great interest in all things scientific and mechanical. King George III presented His Grace with a telescope which he used to determine time throughout the Palace, its Grounds and Estate. The Duke would set the time by the ‘regulator’ grand clock in the Great Hall, which was a perfect timekeeper, and all watches were set accordingly.

Blenheim Time was set by the complicated use of a sundial combined with the specific longitude of the Palace. Due to the proximity to London, Blenheim Palace would have been approximately 5½ minutes slower than GMT today.