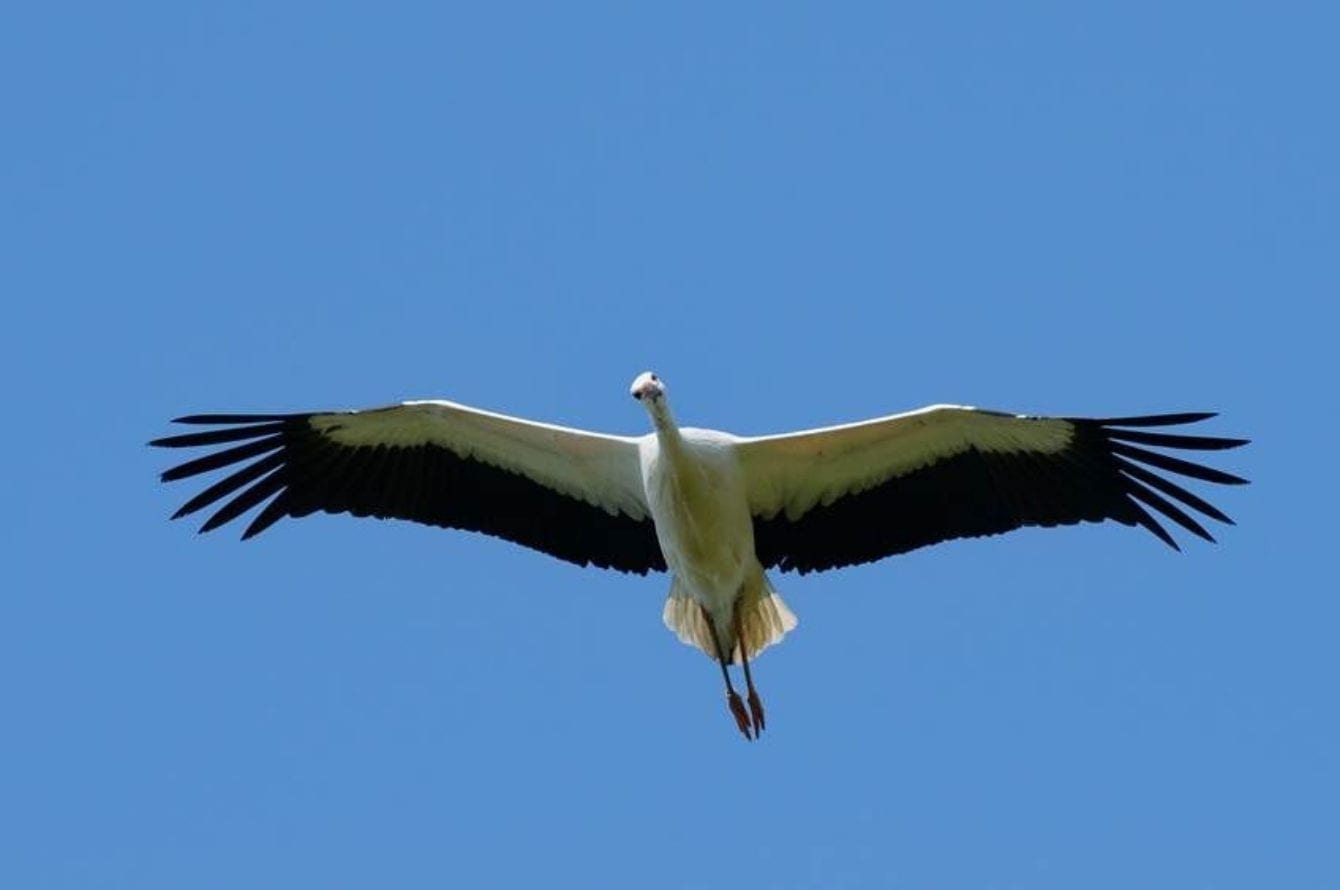 A group of 24 juvenile White Storks bred at Cotswold Wildlife Park have been released at the Knepp rewilding project in West Sussex as part of an initiative to restore populations of the species in Southern England. The last definitive record of a pair of wild Storks successfully breeding in Britain was in 1416.

The birds were raised at Cotswold Wildlife Park earlier this summer before being transported to Knepp. They were initially kept in captivity under the watchful eye of the team at the Park while they became accustomed to their new surroundings before being released on Monday 12th August 2019. The Storks are currently settling in to their new home, but how long they will stay at the site is uncertain.

The White Stork Project is a pioneering partnership of private landowners and nature conservation charities, which aims to restore a population of at least 50 breeding pairs in Southern England by 2030 through a phased release programme over the next five years. Initial releases of adult birds aimed at establishing local breeding populations, as seen for the first time at Knepp this year, have already been undertaken. These new released youngsters, hatched at Cotswold Wildlife Park, will supplement the population.

The team at Cotswold Wildlife Park are husbandry experts for this species and bred the young Storks at the Burford collection from the captive population.

Jamie Craig, Curator of Cotswold Wildlife Park, commented: “It does not seem long ago that we witnessed the first of these birds hatching out at the Park and after months of hard work it was a fantastic moment to watch these birds leave the confines of the netted release pen and take flight – seeing these birds riding the thermals over Knepp is a sight we will not forget and we eagerly await what the future may hold for them”.

All of the Storks that are part of the project have unique coloured rings on their legs, so anyone who spots a stork in the British countryside can report their sightings on the project website (www.whitestorkproject.org). This information will help scientists to understand the movements of the birds. Eight members of the group have specially designed GPS tags on them. These will transmit data on a regular basis so that conservationists can track their flight paths, in particular, to find out if they stay in the UK or whether they fly south for the winter.

The White Stork is a migratory bird species and it is hoped that in the coming weeks these juveniles will attempt to migrate south for the winter. They are expected to cross over the English Channel and then join up with other migrating Storks as they head south through France and Spain before crossing the Strait of Gibraltar, and then the Sahara, to West Africa.

Another key partner in the project, Durrell Wildlife Conservation Trust, will provide post-release monitoring expertise as well as work with the communities surrounding the release sites.

“Having looked after these birds since they arrived at Knepp, it was a joy to see them leaving the release pen and taking to the skies with our free-flying adults. I have been blown away by the response from our local community, many of whom have provided us with sighting reports which are crucial for helping us to understand the behaviour of these young storks. It will be interesting to see whether they decide to stay with our resident adults at Knepp or if they spread their wings and decide to fly south. This is an exciting milestone for the project and I will be following their progress closely.”

Alongside the Knepp Estate, Cotswold Wildlife Park and Durrell Wildlife Conservation Trust, other key partners include the Roy Dennis Wildlife Foundation for their reintroduction expertise. Other release sites include Wadhurst Park in Sussex and Wintershall Estate in Surrey.