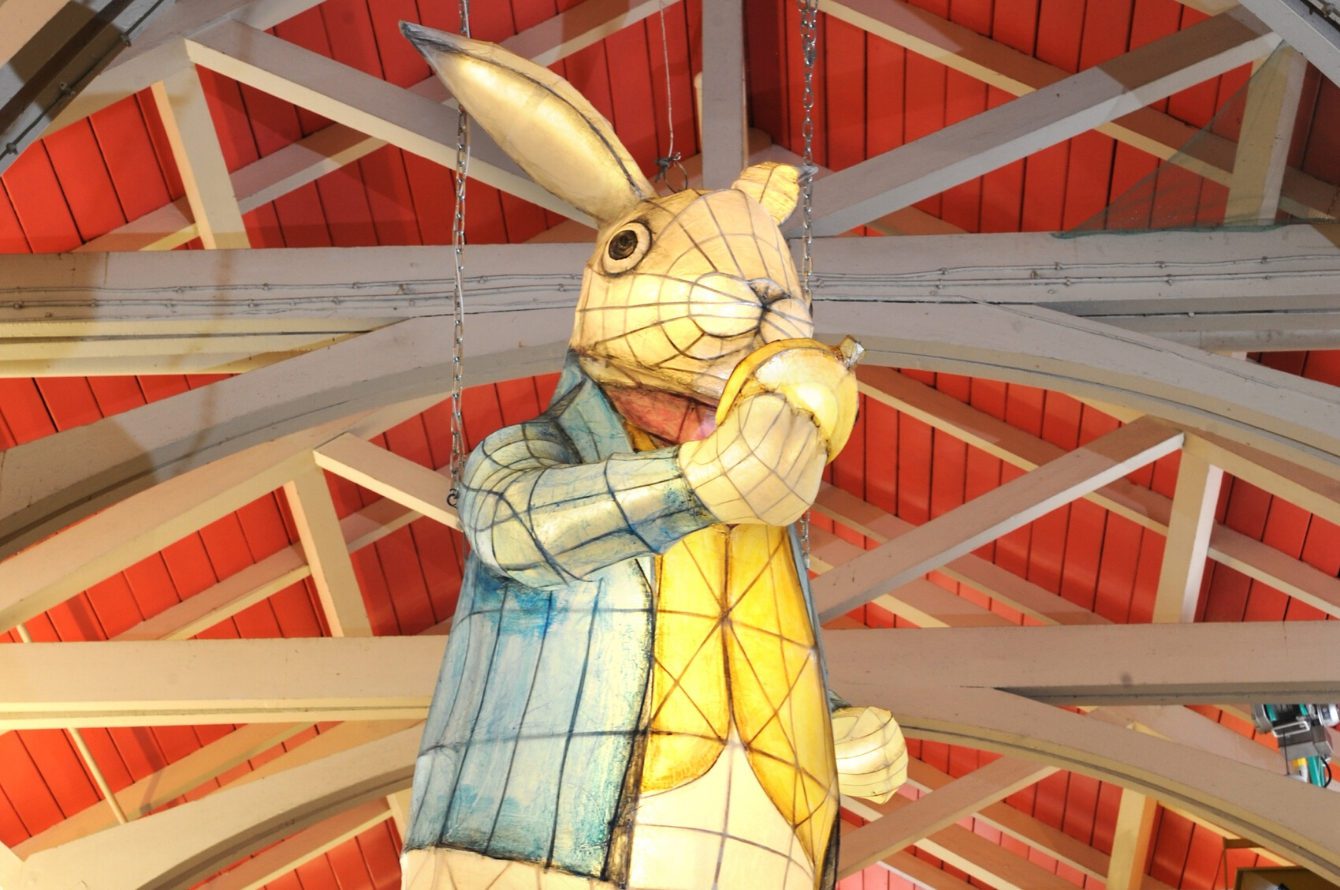 Oxford Covered Market is getting curiouser and curiouser as Oxford City Council fills the 18th century building with Alice in Wonderland sculptures.

So far sculptures of the White Rabbit, Gryphon, Mock Turtle, Cheshire Cat, Caterpillar and Dormouse have been installed amongst the rafters throughout the market.

Next week the Queen of Hearts, the Hatter and Alice herself will join them.

The sculptures have been created by artist Eilidh Bryan, who has specialised in making large-scale puppets and lanterns around the world for more than 15 years.

They are created from willow and paper, and are illuminated using LED lights. Their structure took influence from the market, with the willow skeletons aiming to complement the market’s rafters.

Eilidh has also placed the sculptures near relevant shops: The Dormouse in a teapot has been placed near cafes, the Cheshire Cat near the ice cream parlour, and the Hatter near the hat shop. Alice has the prime spot in the centre of the market.

Alice’s Adventures in Wonderland was written by Charles Dodgson (under the pseudonym Lewis Carroll) in Oxford. As the novel was published in 1865 – long after the Covered Market first opened in 1774 – it is possible that Dodgson used the market.

The City Council has been filling the Covered Market with artwork over recent months, including photographs of Covered Market traders by Aria Photography, a gnome from Oxford’s twinned city of Wrocław in Poland, and murals from local artist Andrew ‘Mani’ Manson.

The Covered Market’s Christmas lights and Christmas tree will go up from Sunday 10 November. The lights will be switched on as part of the Christmas Light Festival on 15 November.

“The Covered Market has an incredibly rich history and it is an amazing space. The twists and turns of the market are a perfect location for the characters from Alice in Wonderland.

“It has been such a pleasure to work on this project. I hope that visitors enjoy the lanterns as much as I have enjoyed making them.

“The Covered Market is filled with local, independent traders offering unique wares, so Alice in Wonderland and Alice’s curiouser and curiouser trip down the rabbit hole felt like an appropriate theme.

“The aim of the artwork is to create even more exciting happenings and experiences as people turn each corner and, ultimately, to attract even more people to visit the jewel in the crown of Oxford’s retail offer.

“A quick look through Instagram clearly shows just how popular the sculptures and artwork are amongst visitors.”