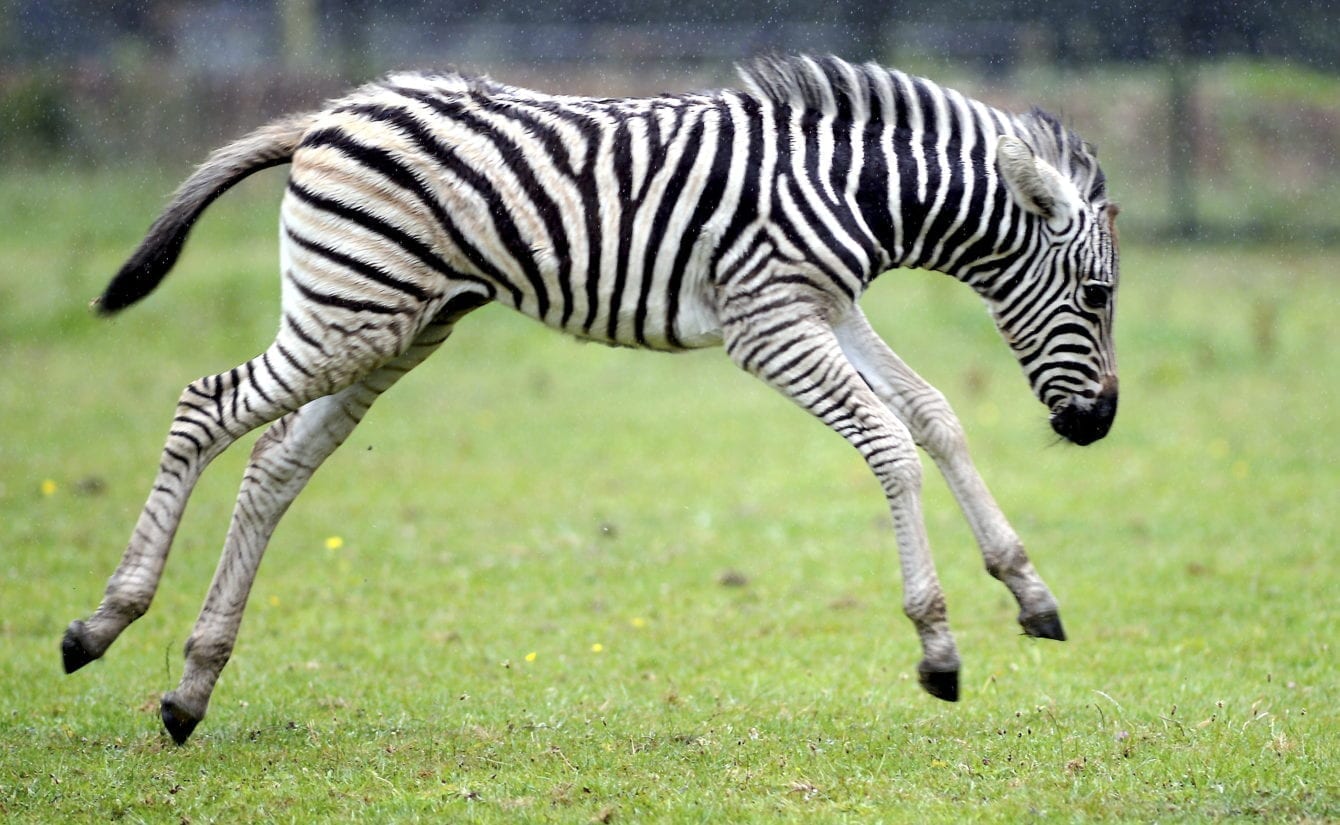 Cotswold Wildlife Park has welcomed the latest addition to the Chapman’s Zebra family – an energetic female foal who has been attracting the attention of visitors with her incredible speed. When she was just a few days old, the newborn was galloping around the paddock and her lively outbursts were caught on camera. Watch the videos here: https://www.dropbox.com/sh/vft23w54oh5l5lc/AABhxe415v60AhM8cc5L_wz1a?dl=0. Speed is vital for survival as they need to outpace predators such as Lions and Hyenas in the wild. Zebras can reach speeds exceeding 35 miles per hour when running across the African plains. Foals are up on their feet soon after birth and can run with the herd within a few hours of being born.

Keepers usually name newborns but pop royalty – Spice Girl Geri Horner, recently paid the Park a visit and was given the rare honour of naming the foal. She decided to call her Geri. Only two other animals in the Park’s history have been named by well-known visitors and supporters of the Park. Back in 2009, two new female Rhinos arrived from Mafunyane Game Farm in South Africa. One was named Nancy by then-Prime Minister and local MP David Cameron in honour of his daughter. The other female was named Ruby by comedienne and friend of the Park, Ruby Wax. 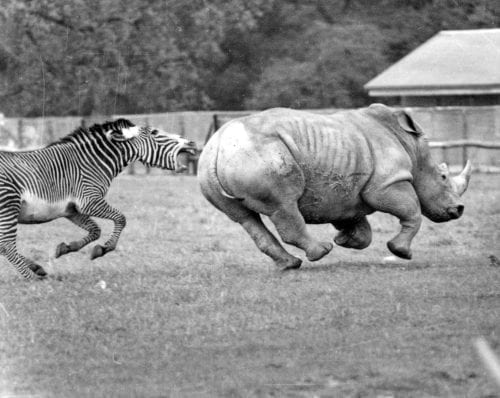 Cotswold Wildlife Park has been home to these iconic African animals since 1976 (early archive photograph pictured left of a fearless Grevy’s Zebra chasing a Rhino around the paddock). The first Chapman’s Zebra (Equus quagga chapmani) arrived at the Burford collection in 1978, eight years after the Park first opened to the public in 1970. This latest arrival is the forty-sixth Chapman’s Zebra to be born at Cotswold Wildlife Park – a testament to its successful breeding programme. The newborn is the fourth foal from mare Stella to be sired by stallion Spongebob. Visitors can see the youngster in the Zebra enclosure opposite the Rhino paddock.

Curator of Cotswold Wildlife Park, Jamie Craig, said: “Zebras are a real icon of the Park and have featured in our logo for many years. For our visitors, Zebras really do bring a sense of the wild to this part of the world and there is nothing more rewarding than the sight of a new foal grazing in the stunning backdrop of the Cotswold countryside”.

These African mammals played a rather unusual role in Britain’s military history. During the First World War, Zebra stripes inspired the “Dazzle” warships – one of the lesser-known battle strategies of the war. British Navy ships were camouflaged with bold Zebra-like stripes, intended to confuse Germany’s U-boats. The idea was conceived and developed by artist and Royal Navy Commander Norman Wilkinson*. He came up with the concept of painting British ships so that they became floating optical illusions. By covering the ships’ hulls with startling stripes, it could momentarily confuse a German U-boat officer peering through a periscope. The bold patterns would make it difficult to determine the ship’s size, speed, distance and direction. He wrote to the Admiralty with his idea for dazzle camouflage and it was approved. In late October 1917, King George V spent an afternoon inspecting the new division of Britain’s merchant naval services – the intriguingly named “Dazzle Section”. Over 2,000 British ships became “Dazzle” warships. 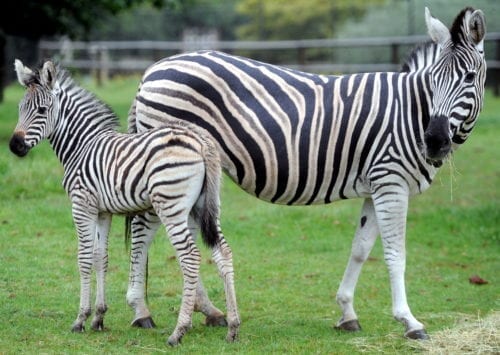 The reason why Zebras have stripes has mystified zoologists for centuries. Even Charles Darwin was perplexed by their bold pattern, as documented in his 1871 treatise “The Descent of Man”. There are more than eighteen different theories about the stripes’ possible functions. Some believe it enables them to hide from predators, others think it helps attract a mate. In 2012, researchers at Sweden’s Lunds University claimed the stripes probably evolved to repel bloodsucking horseflies by successfully scrambling their vision. However, new evidence emerged earlier this year. After spending many years studying Zebras in sub-Saharan Africa, 85-year-old naturalist Alison Cobb, together with her zoologist husband, claimed that the stripes were used to control body temperature. It was the first time Zebras had been assessed in their natural habitat to investigate the role of stripes in temperature control. A laser infrared thermometer was used to record temperatures from six individual stripes at the neck, two in the middle and two at the Zebra’s rump. Their study, published in the Journal of Natural History, revealed the previously unrecorded ability of Zebras to raise their black stripes, thus creating a small convection current between the black and white stripes. Their unique pattern aids evaporation and helps them manage their body temperatures in Africa’s extreme heat. 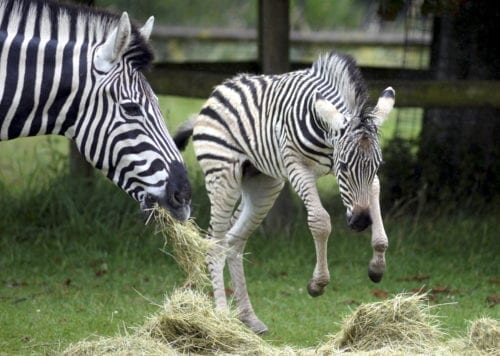 * The collective noun for a group of Zebras is a ‘dazzle’.

* Zebra stripes are as unique to each animal as fingerprints are to humans. No two patterns of fur are identical.

* There are three species of Zebra: Plains Zebra (of which Chapman’s Zebra is a sub-species), Mountain Zebra and Grevy’s Zebra (listed as Endangered on the International Union for Conservation of Nature’s Red List of Threatened Species).

* After a gestation period of approximately twelve months, females give birth to a single foal.

* During the first few weeks of life, the mother is very protective. The newborn recognises its mother by her call, her scent and her stripe pattern. The mare’s protectiveness ensures that the foal will not imprint on another animal.

* The mare will suckle her foal throughout and beyond its first year and their bond is an incredibly strong one.

* Their powerful kick can cause serious injury to predators such as Lions, Hyenas and African Wild Dogs.

* When resting at night, Zebras lie down while one stands watch to prevent an ambush.

* In Ancient Rome, Grevy’s Zebras were trained to pull chariots around at Roman circuses. They were known as “hippotigris”, meaning “horse-tiger”.

* Zebras are the only wild horses that remain plentiful in their natural habitat on the African plains.

Cotswold Wildlife Park opens its doors at 10am every day, with last admission at 4.00pm