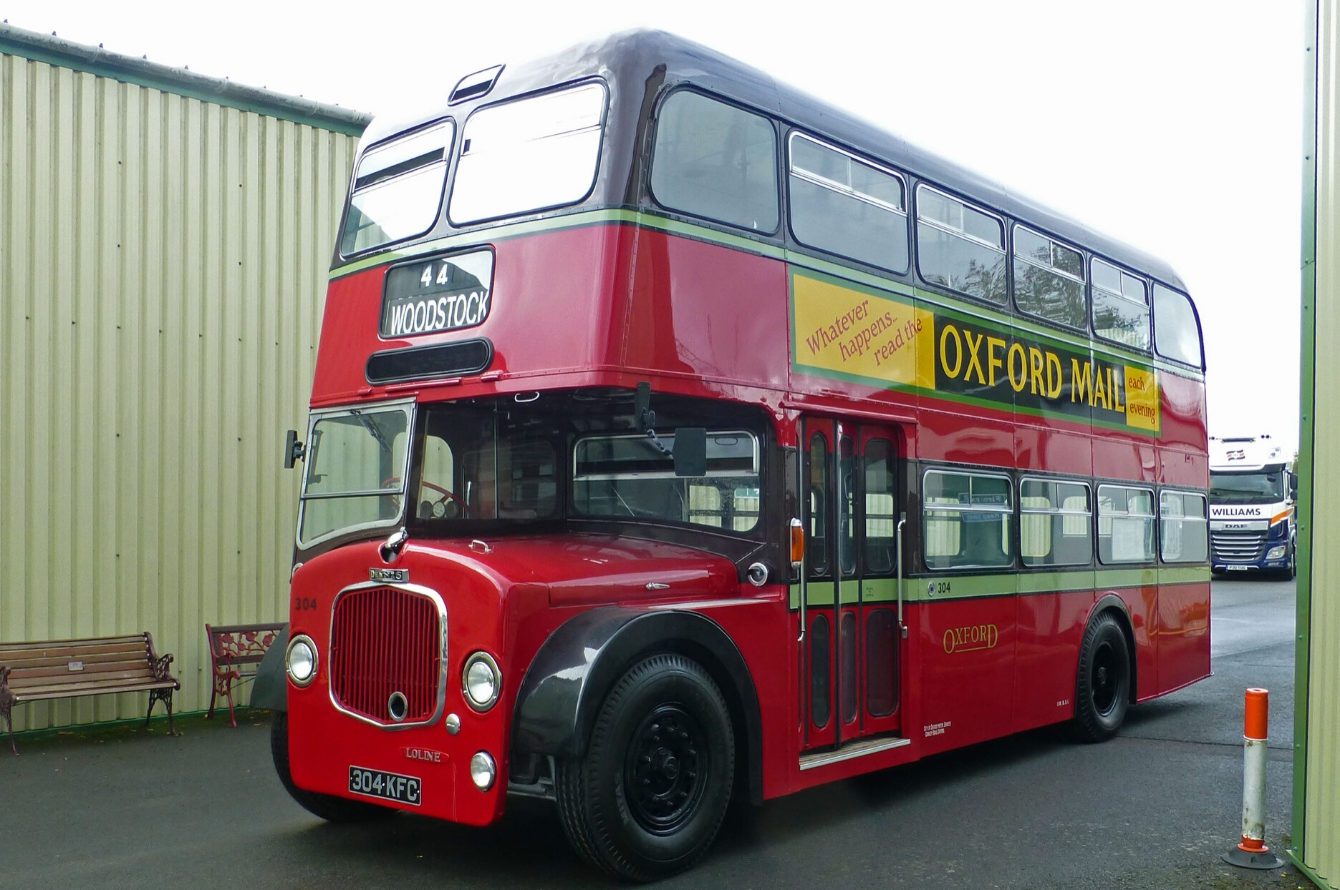 The Oxford Bus Museum’s 1961 Dennis Loline II (304 KFC) has returned from Selby in Yorkshire having had its front end rebuilt, replacement window seals and a complete repaint including period adverts on the sides and rear. The last repaint was over 20 years ago.

Chris Butterfield, a Museum Trustee, commented that “Although the Loline is in running order, 180 miles is a long way for a bus almost 60 years old and the trustees decided it was prudent to bring it back on a low loader.”

There is “mechanical” work to do before the bus can be put back on the road and periodically give museum visitors rides.  Most urgently the rear tyres need to be replaced as they are “past their best”.  Keeping historic buses on the road is not cheap!

The photograph of the shiny bus was taken when it arrived back at the Long Hanborough museum.   Authentic destination blinds, which are contemporary, will be fitted at the museum.

This bus represents the first batch of Oxford buses to give passengers just one step from the pavement into the lower saloon – moving towards the low floor buses of today.

During the half term week 304 KFC will be on display at the museum from 10.30am until 4.30pm on Sunday 27 October, Wednesday 30 October and Thursday 31 October.  Other buses will be providing free bus rides to museum visitors on all these dates.

From 1930 to the late 1960s, the Oxford bus company normally chose chassis built by AEC.  An exception to this was the purchase in 1961 of five Dennis ‘Loline’ Mk II low height double-deckers.  Even so, they were fitted with AEC engines instead of the usual Gardner power units.

Dennis, based in Guildford, had bought a license to manufacture its ‘Loline’ model derived from the Bristol Commercial Vehicles company’s ‘Lodekka’ model.  Bristol was then a nationalized company and unable to supply buses on the open market to private sector companies like Oxford.  Bristol had introduced its ‘Lodekka’ design in the early 1950s with a lowered chassis frame, transmission line angled towards the offside of the bus and fitted a drop-centre rear axle.  This meant the overall height of the bus could be reduced and such a design was an attractive replacement for the earlier ‘Lowbridge’ buses.  There was no need for the offside sunken gangway and rows of four-abreast seats on the top deck.  Oxford specified bodies built by East Lancashire Coachbuilders of Blackburn.

The five ‘Lolines’ introduced the ‘Low height’ concept in Oxford but were followed by a return to AEC who supplied 23 ‘Bridgemasters’ and, by 1967, 43 ‘Renowns,’ up to no 371, the last AEC Renown, which is preserved and resides at the Oxford Bus Museum  in Long Hanborough.

The Dennises were not popular in the fleet being non-standard and could be found languishing in the Cowley Road garage during the day.  It was unusual to see all five on the road at the same time.   When new, 304 temporarily carried the ‘L’ prefix in front of the fleet number as used for earlier ‘Lowbridge’ buses like L166 but this was soon removed.  It was not applied to any of the other 70 ‘Low height’ buses numbered 301-371 inclusive.

Since 2004 we’ve also been home to the Morris Motors Museum, which charts the story of how these classic British cars and commercial vehicles were produced at Cowley, in the city. Our impressive collection of vintage Morris vehicles represents those produced during William Morris’s life.

We also have a unique collection of 40 vintage bicycles.   It wouldn’t be Oxford without bikes!

The museum is a charity and run entirely by volunteers.  There is free parking and a café.

The museum is 70 yards from Hanborough Railway Station just off the A4095 in Long Hanborough.  The full address is Old Station Yard, Main Road, Long Hanborough, Witney OX29 8LA.