As part of The Marlborough School WW1 Project, Woodstock Then and Now, the school’s art department have been working on an idea which ties in with the centenary of the Treaty of Versailles, in remembrance of the soldiers that fell in the Great War.

A group of students have been making poppies which will be ‘planted’ in the grounds of Oxfordshire County Museum, as part of a formal ceremony in conjunction with the Soldiers of Oxfordshire Museum on 28th June 2019. The poppies will remain on display to the public at the site until 24th July 2019.

Invited guests will include Alice Hipkiss and Isabel Wheeler, the Marlborough students behind the project, and individuals with connections to the town’s fallen soldiers, but all are invited to watch the ceremony which will be held at 11am on 28th June. SOFO Museum previously supported Woodstock Then and Now, exhibiting Alice and Isabel’s work in 2018.

Following the formal proceedings, Marlborough students will facilitate an art installation, based on paper poppies, which will reflect visitors thoughts on remembrance, as part of the national Kids in Museums Takeover Day event, at SOFO Museum. They will also guide visitors around the county’s military history museum, which currently features exhibits such as Oxford: The War and the World 1914-1919, offering an insight into Oxford’s international connections during WW1.

Discounted admission prices will also be offered to those visiting the museum between 11am and 1pm on 28th June.

This event will provide a valuable exercise for the pupils involved, and gives members of the community the opportunity to share knowledge and experiences with the younger generation. This activity is hoped to be stimulating for all involved, a great way of learning for the students, and a way to build a closer relationship between the different generations.

The continuing project, which has now received Heritage Lottery Fund support, will focus on research into the First World War using local resources so that information can be shared through the setting up of a dedicated website. The project came about after the opportunity to visit the Battlefields with the award-winning programme 110 Legacy delivered by the UCL Institute of Education and Equity. The project will enable local people in Woodstock to come together to preserve the memories and heritage of those that died in the First World War. 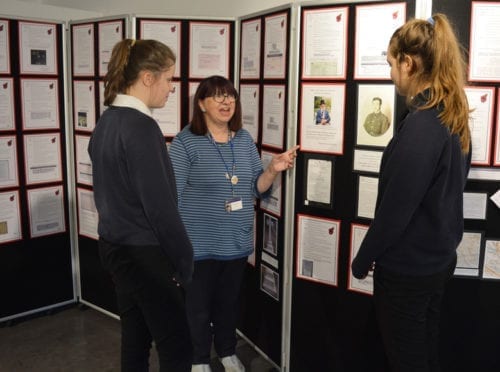 About the Soldiers of Oxfordshire Museum:

The Soldiers of Oxfordshire Trust (SOFO) museum opened during the summer of 2014 and was officially opened by the Princess Royal.

Sitting in the grounds of the Oxfordshire Museum, the site now offers two fascinating museums for visitors of all ages to explore and engage with.

SOFO uses the material of the two county regiments, the Queens Own Oxfordshire Hussars (QOOH) and the Oxfordshire and Buckinghamshire Light Infantry, to act as a starting point for reflecting on the county’s rich and diverse military heritage. These collections contain over 3,500 objects and 7,500 archive items. The regimental collections date back to the late 18th Century and reflect the local regiments’ involvement in major conflicts such as the War of American Independence, the Peninsula War, the Boer Wars, the Great War and World War II, together with less well known events such as the New Zealand war of 1864 and the Brunei emergency in the 1960s. They comprise weapons, equipment, clothing, flags, musical instruments and regimental silver as well as extensive personal memories, diaries, letters and photographs.

The breadth of the collections has allowed us to present and contribute to a wide range of historical themes and mark key anniversaries, for example the 2015 bicentenary of Waterloo and centenary of the Great War.