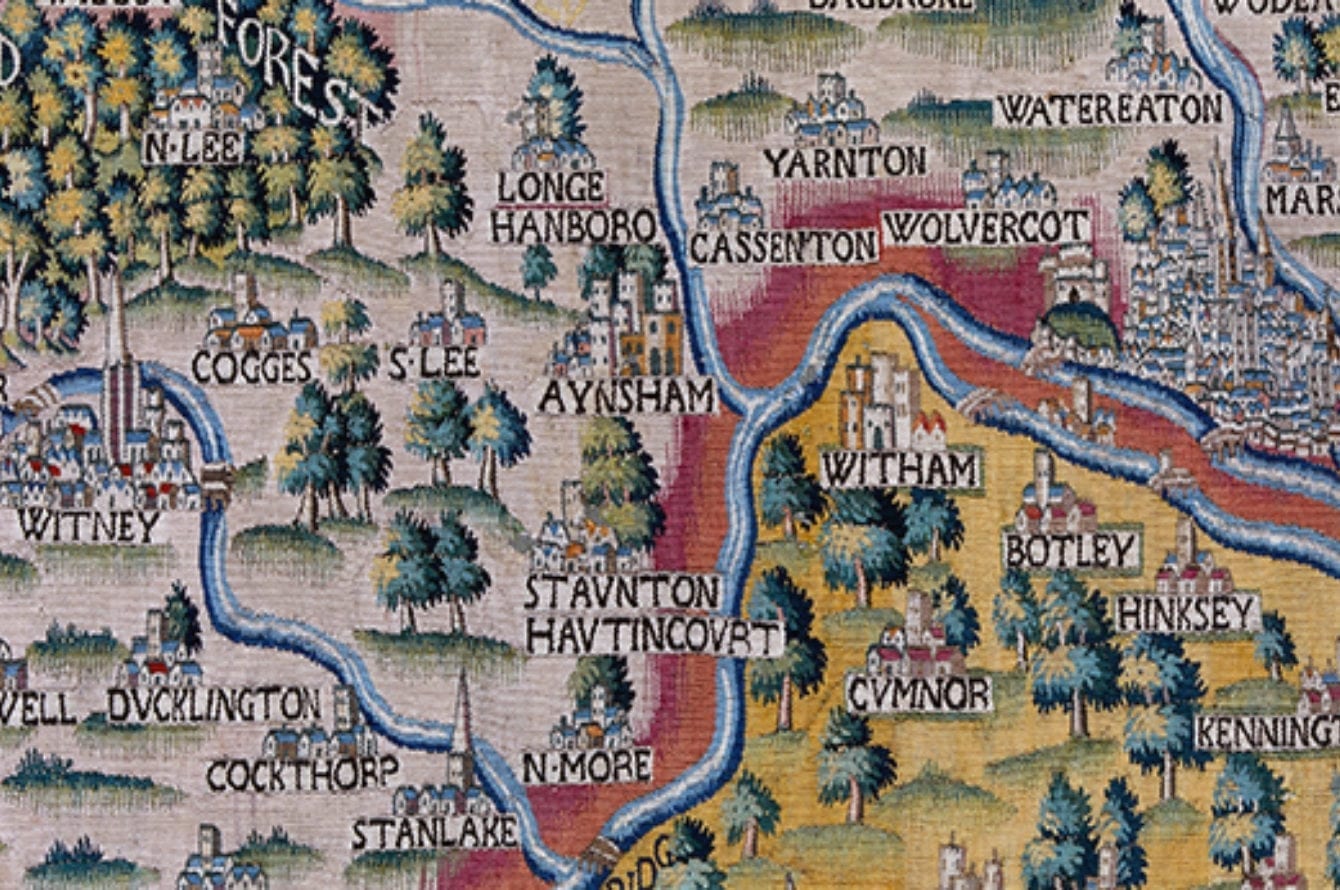 A huge Elizabethan tapestry map of Oxfordshire and the surrounding counties has gone on public display for the first time in centuries. Visitors can see the map at the Bodleian’s Weston Library in Oxford where admission is free.

Woven in wool and silk, the map shows Oxfordshire as well as a vast area stretching from Cheltenham to central London and measures 3.5 by 5.5 metres. The map is only partially complete but what remains features beautiful and incredibly detailed illustrations of sixteenth-century towns and villages, rivers and streams, forests, castles and cathedrals. The many places that survive intact on the map include medieval London, Oxford’s dreaming spires and the White Horse at Uffington.  The illustrations are remarkably true to the architectural style of the buildings, bridges and spires.

The city of Oxford is surrounded by little clusters of buildings and towers representing the surrounding villages such as “Heddendon” (Headington), Marston, “Cowle,” “Iseley” (Iffley), Botley, Hinksey and “Wolvercot.” Magdalen Bridge and Folly Bridge are also shown. London is shown with just one bridge across the Thames and the city is surrounded by the outlying settlements of Islington, “Hakeney,” “Kengington,” “Chelsey,” Lambeth, Newington and Southwark.

Known as the Sheldon Tapestry Map of Oxfordshire, it is one of four tapestry maps that were commissioned by landowner Ralph Sheldon in the 1590s for his home in Weston, Warwickshire. Together, they were designed to provide a view across central England, showing the counties where Sheldon’s family and friends held land. The tapestries were largely based on the county maps produced by Christopher Saxton in the 1570s, which were the very first county maps of England and Wales to be published.

Nick Millea, Map Librarian at the Bodleian Libraries said: “The Sheldon tapestries are of major significance for the history of map-making, forming a unique representation of the landscape, at a period when modern cartography was still in its infancy. The Oxfordshire tapestry is a magnificent spectacle and we are expecting it to be a major draw for visitors who can enjoy spotting familiar landmarks and place names that have personal relevance for them.”

The Oxfordshire tapestry will be on display for a number of years at the Bodleian’s Weston Library, where it hangs in Blackwell Hall, the Weston Library’s public atrium. Staff from the Bodleian’s Map Room are available every weekday from 11.30am – 12pm to talk to visitors about the map.

The Oxfordshire tapestry replaces the earlier display of the Worcestershire tapestry, which has been on show for the last four years and proved to be highly popular with visitors. The Weston Library, which opened to the public in 2015, is both a world-class research library and visitor space that includes exhibition galleries, free displays, a café and shop.

The Oxfordshire map and the Worcestershire map have been in the Bodleian’s collections since 1809 when they were bequeathed to the Libraries by antiquarian Richard Gough. The Libraries later acquired a substantial fragment of what remains of the Gloucestershire tapestry map in 2007.

As part of the project, each of the maps were cleaned at a specialist wet washing facility in Belgium, the De Wit Royal Manufacturers, which offers the most advanced technology for the wet cleaning of tapestries. At the National Trust’s Textile Conservation Studio in Norfolk, the conservation work on the Oxfordshire tapestry included stitching, rebuilding areas of the map, embroidering parts of place names that were missing and correcting how the tapestry was mounted so that it is more geographically accurate.

In addition to the Oxfordshire tapestry, visitors can also see the newly conserved Gloucestershire tapestry on display in the Bodleian’s Talking Maps exhibition, which opens on 5 July 2019 and runs until 8 March 2020. Talking Maps celebrates maps and the stories they tell. The exhibition showcases iconic treasures from the Bodleian’s world-renowned collection of more than 1.5 million maps, together with specially commissioned 3D installations and exciting items on loan such as Grayson Perry’s contemporary maps. For more information, visit https://www.bodleian.ox.ac.uk/whats-on

The conservation of the Bodleian’s Sheldon tapestry maps was made possible thanks to generous donations from The Guy and Elinor Meynell Charitable Trust, J Paul Getty Jnr Charitable Trust, The Clothworkers’ Foundation, The Drapers’ Charitable Fund, Lady Elizabeth Marriner and other donors.