MP Officiates as 1897-built Locomotive Gets Back on Track 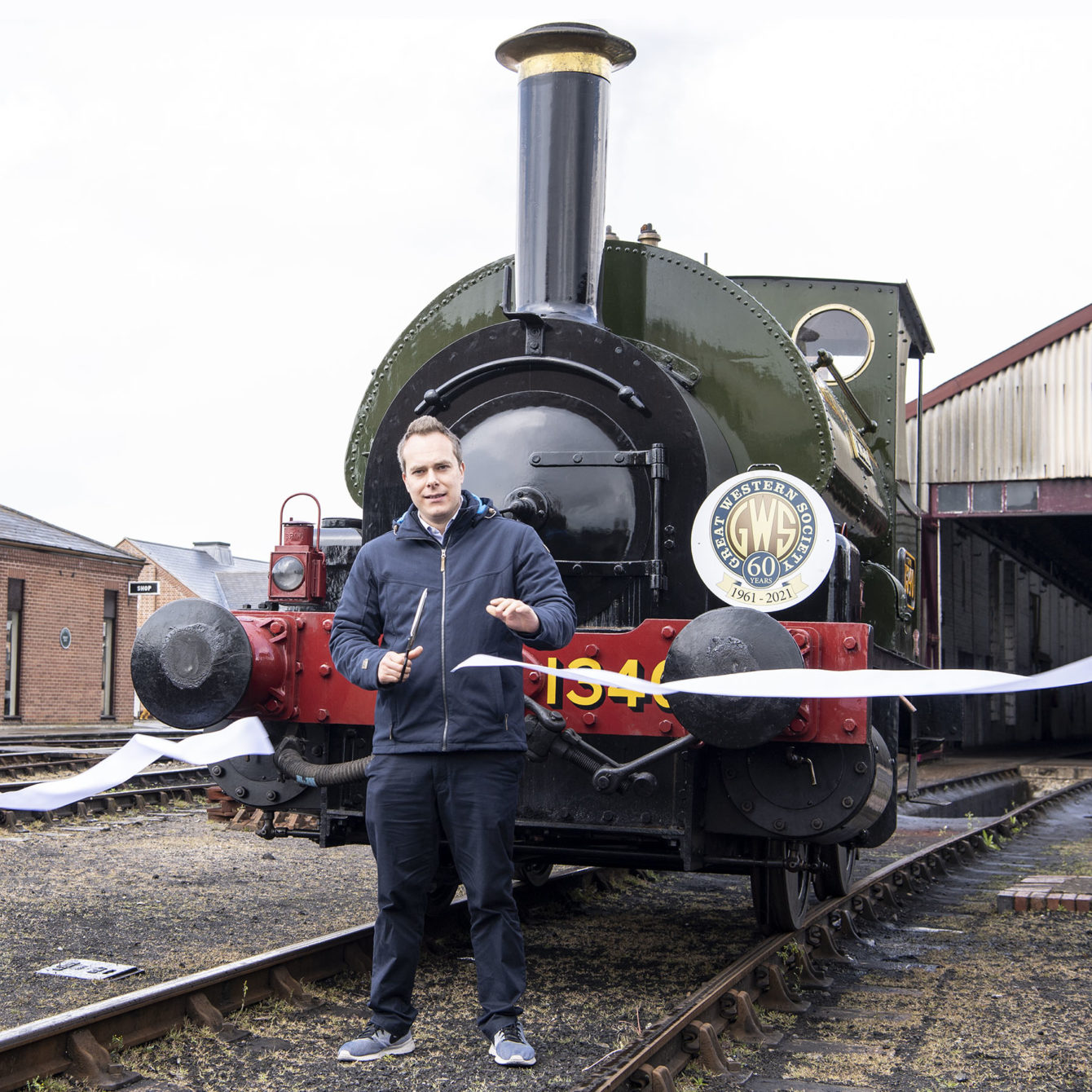 MP David Johnston OBE, whose Wantage constituency includes Didcot Railway Centre visited the popular tourist attraction on Saturday 1 May to officiate at a short ceremony to mark the return to service of the oldest working locomotive at the Loving Musuem, No. 1340 “Trojan” which dates from 1897.

The diminutive locomotive was returning to service for the first time in a decade following an extensive overhaul that has cost around £200,000.

Richard Preston, Chairman of the Great Western Society the Charity runs the Centre, welcomed David to the site and thanked him for his support throughout the pandemic and asked that he convey the Society’s appreciation to government ministers for the Culture Recovery Fund and Job Retention Scheme grants that have been a lifeline through the past 14 months during which time the Centre has been able to open for just 65 days.

David paid tribute to the staff and volunteers that have toiled to keep the Centre in good order during that time, not only maintaining locomotives, carriage wagons and buildings but also managing to work on restoration projects such as “Trojan”.

Following the ceremony, “Trojan” was in action alongside locomotive 4144 for the Centre’s May Bank Holiday Steam Days on 1, 2 and 3 May with over 1,000 visitors enjoying the three-day event.

Head of Visitor Experience and Marketing, Graham Hukins said “It’s wonderful to be open and welcoming visitors once more and we should like to thank them all for their support. “Trojan” has proved extremely popular and seeing her back in steam is a great way to start our 60th Anniversary Year.”

“Trojan” is the oldest, working standard gauge GWR engine, having been built in 1897 to work at Newport Docks and being acquired by the Great Western in 1923. The locomotive was given the number 1340 by the GWR and remained with the Western until 1932 when she was sold to the Netherseal colliery at Burton-on-Trent.

The Centre is open at weekends and Wednesdays and either “Trojan” or 4144 will be in action on Steam Days in May. With coronavirus restrictions still in place, tickets are limited and need to be booked in advance at DidcotRailwayCentre.org.uk. On site, visitors can explore almost two centuries of railway heritage set across 21 acres. Steam trains will be running on the Centre’s demonstration line offering unlimited rides aboard a train of beautifully restored vintage carriages with each group allocated an individual compartment for their trip.

The Society exists to preserve, restore and operate, as a permanent public exhibition, locomotives, rolling stock, equipment, machinery and relics of historical operational and general interest and educational value with particular reference to the former Great Western Railway and its successors.

Didcot Railway Centre houses and displays the collection, which is thought to be the biggest collection of items relating to one railway company, anywhere in the world.

Visitors to the Centre can see almost 200 years of railway history including Great Western Railway steam locomotives, carriages, wagons, buildings and smaller artefacts is based around the original 1930s Engine Shed and Coal Stage. There’s also a section of Brunel’s original broad gauge track complete with replica locomotives and coaches.