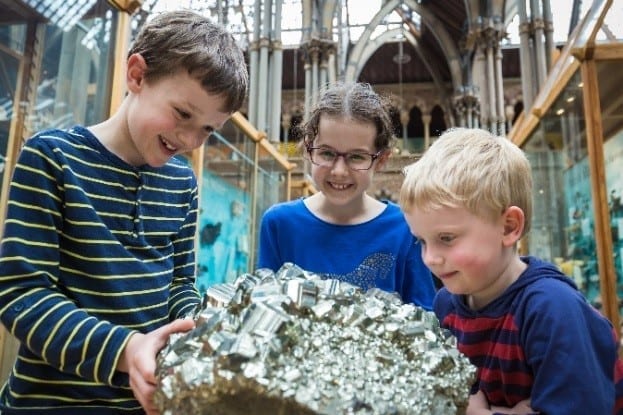 These are a few of our favourite things: children’s favourite objects feature in summer trail at Oxford University’s gardens, libraries and museums

With over 8.5 million objects and specimens in Oxford University museums, and 6,000 different types of plant in the Oxford Botanic Garden, there is certainly a lot to choose from when selecting your favourite.

From the dinosaurs in the Museum of Natural History to Albert Einstein’s blackboard in the History of Science Museum, the University collections offer a treasure trove of wonders to delight visitors of all ages.

Last summer, children visiting the four museums and the Botanic Garden were asked to nominate their favourite object from across the collections.

This summer, those favourite objects have been turned into a trail across the seven sites that make up Oxford University’s Gardens, Libraries and Museums.

The Wonder Trail comprises 14 ‘wonders’ chosen by children. The 14 objects were selected from over 1,600 nominations received from visitors, whose average age was 8.

The trail has been designed to appeal to new and regular visitors alike. The items are therefore a mix of firm favourites, such as the black bear at the Museum of Natural History, and more hidden treasures, such as a lantern made out of a puffer fish at the Pitt Rivers Museum.

The black bear was one of the top-scoring objects, receiving 56 nominations – particularly from younger visitors. As one five-year-old remarked: ‘I’ve never stroked a bear before.’

For older children, the scary or cool proved more of a draw. The carnivorous plants were a hit at the Oxford Botanic Garden, while the Egyptian mummies at the Ashmolean Museum were met with appreciative delight by 33 visitors. ‘Gross and awesome!’ was the verdict of one satisfied nine-year-old.

Size was also a deciding factor when choosing a favourite. The Haida totem pole in the Pitt Rivers, which stands at over 11 metres tall, attracted 47 nominations. And the giant waterlilies drew top billing at the Botanic Garden and fired imaginations. ‘They’re like a natural lilo,’ said one ten-year-old.

The Wonder Trail is a free family activity running across Oxford University Gardens, Libraries and Museums this summer. Visitors can pick up a free trail pass in any of the 7 sites and use it to find 14 objects. Stickers are awarded when an object has been found and a question answered. A prize can then be claimed for every 3 stickers collected.

Prizes include a range of mini minerals (pyrite, amethyst, calcite with iron, and Iceland Spar) and a collecting bag so that children can start their very own collection of wonders.