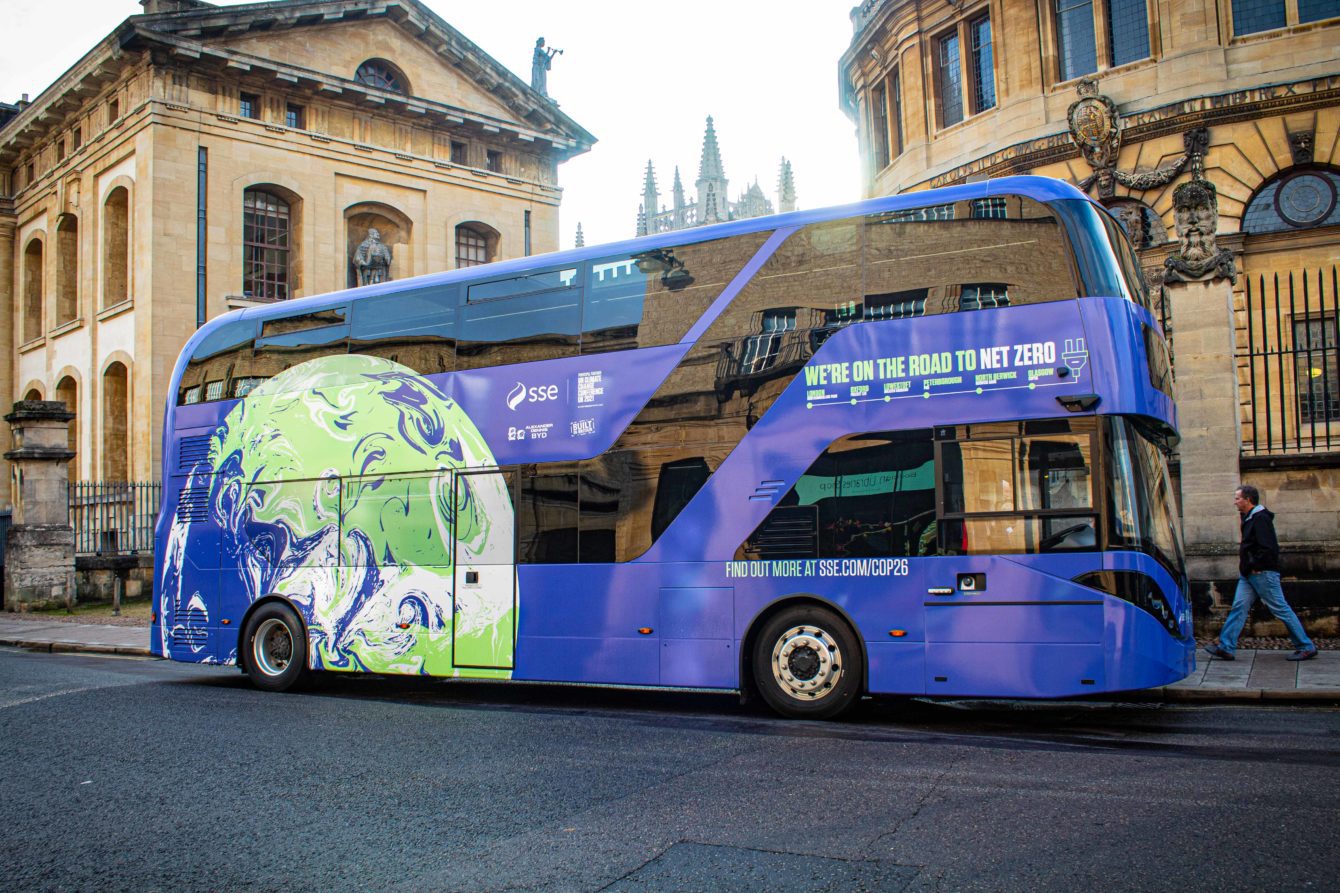 Oxfordshire has been heralded as a local energy champion in the fight against climate change as the UK prepares to host the COP26 summit next month.

A fully electric double-decker bus pulled into Oxford City Centre on the first stop of a ‘Road to Renewables’ nationwide tour.

Showcasing same of the most innovative clean energy projects across the UK, the tour is organised by renewable energy leader SSE and bus manufacturer Alexander Dennis.

The COP26-branded bus, built by Alexander Dennis, stopped off in Oxford as part of the two-week tour to mark the success of Project LEO (Local Energy Oxfordshire) in putting Oxfordshire front and centre of the clean energy transition.

The bus was welcomed into Oxford by representatives from Project LEO, the UK’s most ambitious local energy trial. Project LEO seeks to accelerate the UK’s transition to a zero-carbon energy system.

With its thriving community energy scene, supportive local authorities and lively innovation networks, Oxfordshire is ideally placed to host the Project LEO trials. With 100,000 new homes planned in the county between 2016 and 2031, Project LEO is testing ways to balance supply and demand while harnessing the benefits of ‘flexible energy’ for local people as the demand for electricity grows. Energy flexibility, making temporary changes to the generation, storage or use of electricity at particular times of day, can help balance supply and demand on the network. This helps ensure that there is always the right amount of energy available when it is needed. The cross-sector collaborative project is led by Scottish and Southern Electricity Networks (SSEN) in partnership with the Low Carbon Hub, businesses, academics and local authorities across the county.

The electric bus stopped overnight at Oxford Bus Company’s Cowley depot to charge up for the next leg of its journey. Oxford Bus Company’s on-site batteries took part in the very first Project LEO trial, exploring how energy storage can benefit and operate within a local flexibility market. It is hoped the results of Project LEO trials like this one can be replicated in community energy projects across the UK.

Phil Southall, Managing Director of Oxford Bus Company said: “Oxford is world famous for its innovation and the city is currently working really hard to help achieve net zero, not just for our own city but also to help inform similar efforts worldwide. We are really proud to have played a part in Project LEO and are focused on supporting the city in its ambitious decarbonisation plans.”

Melanie Bryce, SSEN’s Oxfordshire Programme Director said: “Project LEO has a key role in helping us understand how smart local energy systems and renewable generation can be used to support the UK’s carbon zero aspirations. Our trials in Oxfordshire are helping us to turn these ambitions into actions.”

Malcolm McCulloch, Associate Professor in Engineering Science and Group Leader of the Energy and Power Group at the University of Oxford said: “In order for flexible energy to work for businesses and communities of every size and at any location, we need to work in partnership to find the best means to roll out new technologies. Project LEO is a prime example of an initiative doing just that. Working together to share the benefits of flexible energy in a greener system.”

Tim Sadler, Chairman of the Low Carbon Hub, a social enterprise utilising its community owned assets to deliver the Project LEO trials, said: “The ‘Road to Renewables’ tour is a reminder that we are all part of COP26 and have a role to play in its objectives to reduce global emissions. In Oxfordshire, Project LEO is a beacon initiative that puts communities and partnership at the heart of the energy transition.”

A combination of renewable resources, batteries and digital technologies are being used to develop smart energy solutions. The trials are exploring the challenges and opportunities of these different energy assets and looking at how barriers can be overcome. SSE is a major partner at COP26; and alongside the Go-Ahead group, Alexander Dennis, BYD and SWARCO Smart Charging is using the EV bus tour to showcase examples of the national effort already underway to decarbonise energy.

The ‘Road to Renewables’ tour kicked off in Northumberland Park EV bus depot in London on Monday 18th October and will take in projects in Oxfordshire, Suffolk, Peterborough, Manchester, Nottingham, Harrogate, Newcastle and North Berwick before concluding in Caledonia bus depot in Glasgow on Friday 29th October.