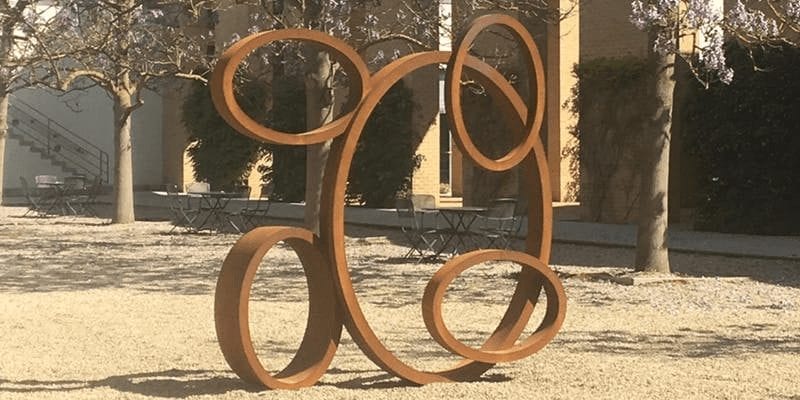 An exhibition of work by Nigel Hall RA and Manijeh Yadegar

Art at Oxford Saïd is proud to present Significant Others – an exhibition of work by Nigel Hall RA (b.1943) and his late partner Manijeh Yadegar (1951-2016), who lived and worked together for over 40 years. This exhibition will explore the intellectual and artistic dialogue between the two artists –  a sculptor and a painter respectively – whose practices are both dedicated to abstraction and minimalism. The two exhibited on a number of occasions during Yadegar’s lifetime, but this exhibition at Oxford Saïd will be the first time since Yadegar’s passing.

Saïd Business School is lucky enough to own in its permanent collection two works by the Royal Academician – the sculpture ‘First Light’ is situated in the corridor by the central courtyard alongside a pair of drawings in charcoal. This exhibition is part of Art at Oxford Saïd – a programme that explores the interconnections between art and business and which sets out to delight and inspire the community of the school while also reflecting its values.

The exhibition is open to the public on Tuesdays and Fridays.

Mutual respect for each other’s work underpinned the relationship of these two artists, and the exchange of ideas and an immersive understanding of each other’s work was pivotal to their respective practices and artistic evolution. Hall describes Yadegar’s work as ‘atmospheric, often monochrome, smoky and textural’ and reflects `We were both interested in abstraction, but fundamental to the works was an interest in landscape. We travelled a lot together, particularly to Switzerland, and were interested in each other’s work. She gave me good advice. She didn’t exhibit a great deal, and was too modest, shying away from opportunities lest people though that she received them because of me.’

Nigel Hall studied at the West of England College of Art, Bristol from 1960 to 1964 and at the  Royal College of Art, London from 1964 to 1967. A Harkness Fellowship took him to the United States from 1967 to 1969. Hall has had many exhibitions around the world and is widely collected. His first tubular aluminium sculpture was made in 1970. In subsequent years he explored the ways in which tubular construction alters the viewer’s perception of space. His recent work has been less minimal in feel, tending towards stronger, more solid forms. A major retrospective of his work was held at the Yorkshire Sculpture Park in 2008. A solo exhibition of his work was held at the Royal Academy in 2011. Hall was awarded an honorary doctorate by University of the Arts, London in 2017.

Manijeh Yadegar was born in Esfahan, Iran and came to England when she was just 13. She trained at Chelsea and Camberwell Schools of Art in London. Although she worked in comparative seclusion since her student days, during her lifetime she was the subject of five solo exhibitions in

South Korea, Sweden and London and contributed to over 50 joint exhibitions worldwide. In 2001 she was artist in residence, at Chretzeturm, Stein am Rhein, Switzerland. Her work is represented in the collections of Deutsche Bank, London, The Contemporary Art Society, London and many private collections in England and abroad. A solo exhibition was held in Venice and London by Zuleika Gallery in 2018.