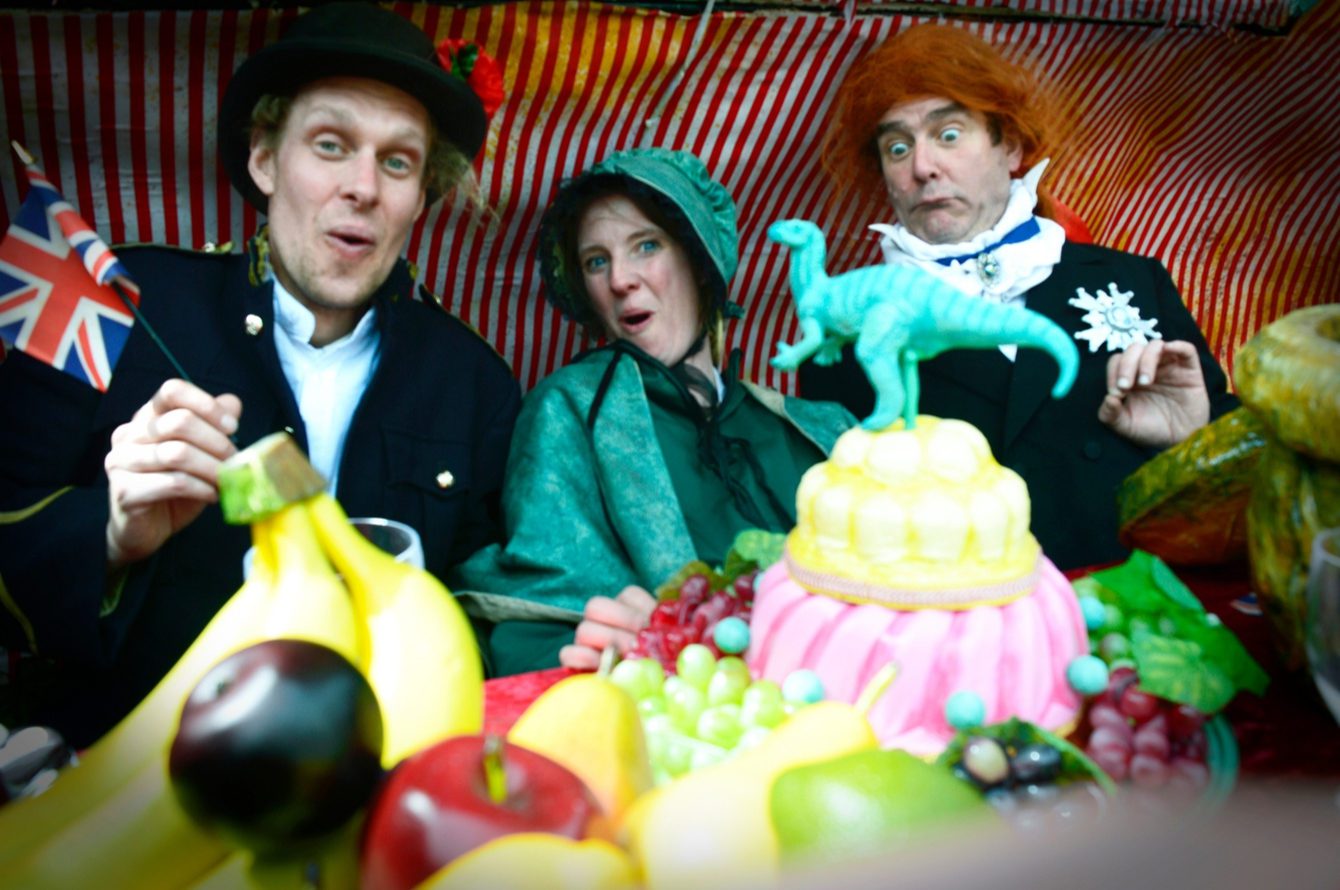 IF Oxford bursts into life, there’s a chance for children to get down and dirty with science at family events across the city. From exploring the city’s geology with a trowel to uncovering the secrets of the human body through a microscope or peering into the far reaches of the galaxy, there’s something to intrigue and inspire visitor of all ages, whatever their interest.

With comics and computer games, theatre and dance, curious children can explore the mind and stretch the imagination, hold a rock from the moon, relive history inside a giant dinosaur and discover the role diamonds play in their hand-held technology.

Children and young families are spoilt for choice at this year’s IF Oxford science and ideas festival (18-28 October) with events ranging from rhyme-times to theatre shows, and hand-on activities from building a robot or having a go at cutting edge surgery.

Events for younger children kick off at Oxfordshire County Library on Friday 18th October, the first day of the festival (Rhymetime; 11am). Other Rhyme- and Storytimes during the course of the festival include an exploration of the animal kingdom, and the chance to discover machines and technology in robot-themed rhyme.

During the first weekend of the festival there are dozens of activities and events for all the family. At the Westgate Wonderlab shopping bags gives way to science and idea on Saturday 19th October. One of the visitors, Iggy, has come all the way deep in the rock of the Jurassic coast. He’s a giant dinosaur whose giant belly opens to reveal a team of Victorian dinosaur experts debating the newly-discovered fossil record at a fun-packed banquet. In this fun family theatre show from Emerald Ant, pink puddings spin, pigeons fly from pies and there’s mayhem and more as the story of evolution unravels. (Iguanadon Restaurant; shows at 12pm and 2pm)

You can also explore the universe inside our bodies at a family dance performance (CELL- exploring the universe inside our bodies; Sat 19th October, St Michael’s Primary School, Marston) in which giant inflatable cells come alive to music whilst there’s codebreaking and puzzles inspired by mathematician Ada Lovelace and friends at the History of Science Museum (Lovelace’s Labyrinth; 12-4pm).

The Explorazone takes over Oxford Town Hall on Sunday 20 Oct and promises to be a packed day of family-fun. Visitors are invited to imagine what would life be like in a future city with driverless vehicles and cameras that cane spot invisible things thanks to quantum technology. There’s also the chance to use augmented reality transform the room into a scale model of the universe with a pair of ‘magic’ glasses. In an zone run by gaming students from City of Oxford College investigate the effects of colour on emotions; ask whether worms are really secret superheroes with the Oxford Brookes Department of Biological and Medical Sciences and take part in a robotics challenge to make a miniature sun with the UK Atomic Energy Authority.

Children are also taking to the stage during the festival, as the winning entries to this year’s IF Oxford Poetry of Science 2019 are presented by the competition finalists aged from 5-14. (12.30pm Oxford Town Hall.

A further highlight of the afternoon is the chance to brainstorm new species from evil cyborg sea monsters to the wonderful and whimsical with US comedian and cartoonist Mike Capozzola (Capozzola’s cartoon creatures; 3.30pm).

As the festival continues into the second weekend and on into half term, there are more mind-blowing discoveries, questions to ponder and insights explained, for children, in both the city centre, in Headington and in Cowley’s community spaces.

Young geologists are invited to take their trowel and rock-up to Headington’s Stansfield Park to crack open history, pan for gold, and hold a real piece of the moon (Science Oxford – geology rocks various times) whilst in Oxfordshire County Library, youngsters are encouraged to look inside something other than books: at Incredible You (12pm) visitors will discover the surprising beauty of your body under the microscope and be inspired to draw by biology’s beauty.

Visitors can discover secrets of the human body over at Templars Square too as Science at the shops in Cowley kicks off with a day’s activities investigating how the body works, how vaccines keep us healthy and how to make a micro-‘catapult’ for medicines. With just a smart-phone, youngsters can peer inside our internal anatomy while The Futures Thinking Network explores the nightmares in our minds and sees how close to reality they really are.

The focus of the second day of Science at the shops moves from beneath the skin to beyond the sky. Fifty years after people first walked on the moon, discover what we have learnt since, and look at what the future holds for our digital selves, and consider the potential of x-rays 10 billion times brighter than the sun.

As half-term begins in Oxfordshire, families are invited to drop by The Board Game Café (11am-3.30pm; Old Fire Station Café) to pit their wits against one another and learn about fresh thinking in old fashioned style. Families can, for example, choose to play Dr Panic – a board game reminiscent of the popular game ‘Operation’ or to save species and the human race in conservation themed scenarios.

With ‘Lights, camera, action’, Blackbird Leys Community Centre also blasts into the action on the last day of the festival (BLAST; 11am-4pm). Here a planetarium dome gives children the chance to see to the far reaches of the galaxy. Other highlights include the chance for children to make their own action movie on the Green Screen, to be a scientist in an on-line Minecraft environment; to trick or be tricked by artificial intelligence. Who will come out on top? There are also drop-in activities at the City of Oxford Technology Campus throughout the day (Today’s Skills, Tomorrow’s Technology) where the talents of Oxfordshire scientists and engineers today are taking us in the twenty-first century.