Wild Art in an Oxfordshire Winter 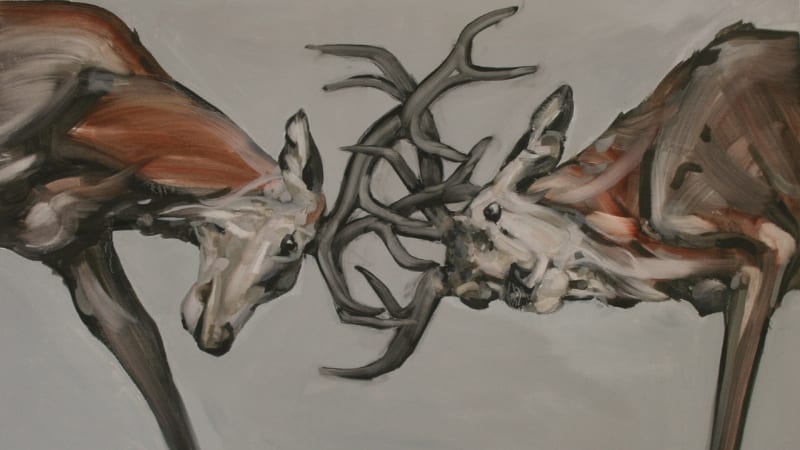 As we see the New Year in here in Oxfordshire, there’s a wildness to the art across the county this month to match the winter weather whilst other shows promise warmer days to come.

The perfect mid-winter contemplation, a thought-provoking multi-media show in Summertown’s The North Wall, is a project conceived during research for a trip to the Atlantic islands of St. Kilda, the remotest part of the British Isles, in Scotland’s Outer Hebrides. Evacuated on August 29th, 1930, the 36-strong population of the island of Hirta had elected to leave their home, occupied by their forebears for four thousand years, to escape the increasing privations of the island, a theme relevant today as people travel into uncertain futures to escape the effects of climate change and conflict.

In the exhibition, Lace Weight, careful drawings of feathers, some battered, dirty and ugly, some discarded and some lost in unfortunate circumstances, speak of versatility, resourcefulness and strength but also of vulnerability as we navigate hostile environments. Alongside, paintings, drawings and sculptural pieces evoke an outward journey of courage, optimism and fearfulness. In the work, OVADA studio artist Imogen Rigden contemplates how the disintegration of any community affects cultural continuity and the well-being of women. The security of our own networks and the potential pain of isolation are explored through the existence and destruction of a lace weight shawl.

Also on Oxford’s South Parade, the Sarah Wiseman Gallery explores nature’s darker edge in the ‘Nature of the Beast’ (12th January – 9th February 2019) with illustrations and paintings of wild animals from a group of artists whose work looks to nature and its darker edge. Each of the selected artists work in a variety of media including painting and photography. In rich earthy tones, creatures both domesticated and wild are shown in a new light.

Rory Carnegie’s photographic prints from a series of animals entitled ‘Long Ago and Far Away’ shows animals removed them from their natural surroundings, playing with our perception of a familiar looking beast, heightening the extraordinariness of our wild-life species. Placed against the atmospheric backdrops of a British rural landscape, a tiger’s stripes become even more vivid and surreal, and a bird’s plumage becomes more bizarre and outlandish!

Abigail Reed has turned her attention to moths, drawing them in huge scale in charcoal. By altering their size, she brings into focus the mystery and strangeness of a creature that looks unearthly but exists in reality. ‘The animals appear familiar, yet distinct from man…we are in conflict with nature yet we are in awe of it,’ she says.  Abigail’s pieces also includes larger beasts from majestic stags to rearing bears. Painted largely in monochrome, or with only a hint of colour, these works express a wild creature’s sheer, unpredictable power. Her strong, vigorous brushwork sweeps over the canvas, also captivates a fragility.

The inspiration for artist Helen Ward’s ‘Lepidoptera’ series comes from a stack of original Victorian marbled paper that she discovered at a book fair whilst still a student. Helen selects and cuts each insect, moth and butterfly by hand showing immense skill and control with the scalpel. The paper cuts are pinned with entomology pins to the soft white background and carefully positioned to create beautiful shadows and elegant compositions. Darkly romantic, these pieces capture the imagination, conjuring images of dusty libraries and forgotten treasures waiting to be discovered.

James Fotheringhame Nature painter James Fotheringhame has an intense curiosity for the natural world, studying it both in the field and in the studio. His paintings are expressive, filled with light and movement as he seeks to find fleeting moments in nature. James is also a renowned garden designer and the gardens he creates fuel the inspiration to paint the flora and fauna that inhabit these spaces, satisfying a need to document his discoveries.

In The Mill Arts Centre, Banbury, you can find open white skies and the curve of the coast in loose lines, tranquil autumnal rusts and mist-soaked mountains. Driven by an instinctive and emotional response to the landscape, Rachel Cronin seeks to explore two very different environments; the wildness of mid Wales and the gentle, verdant beauty of Oxfordshire in a series of abstracted landscapes in watercolour and mixed media runs until 27th January).

There’s sea and salt to lift the soul in Radley College’s Sewell Gallery, which welcomes visitors to enjoy a touring exhibition from Cornwall Contemporary, a gallery based in Penzance (from January 12th until Feb 14th). The beauty of the coast is a clear inspiration for much of the art on show by a number of Cornish artists with very different styles.

Artist Maggie Matthews, for example, depicts the shapes of shells and seedheads, pebbles or petals- each a moment in time along the coastline – with a freshness and delicacy as crisp as a gentle sea breeze whilst fellow painter Nick Pinkett captures the geographic diversity of the furthest reaches of the country – from the turquoise seas of parts of the Cornish coast to the wild energy of crashing waves. ‘I work with a knife as I want to express as forcefully as I can the forces of nature, the ever-changing elements, cloud formations, piercing blue skies over acres of red bracken, the raw beauty of the landscape,’ he explains.

David Mankin’s Cornish landscape are dramatic vivid abstracts that draw inspiration from the coastline, the wild, empty moors beneath big skies, beach boulders, winding farm tracks; surging seas and the ancient fields bordered with stone hedges. David particularly enjoys getting out into the landscape and the elements that shape it – wind, sea, rain and man-made and this experience is almost tangible within the paintings. Some of artist Alasdair Lindsay’s pieces take a bird’s eye view and as well as the sea, recently he has been painting the tidal Thames: ships and sweeping shadows, barges and bridges from above with careful composition that can be almost geometrical, strong lines and a cleanliness of colour. They’re a wonderful take on the city of London.

And for another interesting eye on urban scenes, visit The Old Fire Station Gallery in Henley-on-Thames, for an exhibition (that combines abstract architectural photography by Tracy Florance and organic ceramics by Sally Dorrity, the two very different bodies of work complementing one another with surprising effect. Tracy specialises in original photographic images from around the world. Currently, her particular interest is in contemporary architectural subjects where she emphasises patterns and shapes which others might miss. She takes her camera with her wherever she goes, attempting to capture the essence of the places she visits.

Sally works in stoneware to hand build her pots for both indoors and out, using either crank, white or black clays to create small, medium and large pieces, both functional and sculptural. Constantly experimenting with shapes and glazes, getting inspiration from classical forms as well as the tones and textures of nature, Sally’s pieces range from small vases and dishes to large Ali Baba pots and sculptures. The vibrant blues glisten on her urns and birdbaths like crystal water on stone, and their soft shapes add the magic of a hidden glade to the crisp and often colourful photographs that surround them.

Some place to see good art this month: