The Heavens Will Move With IF Oxford 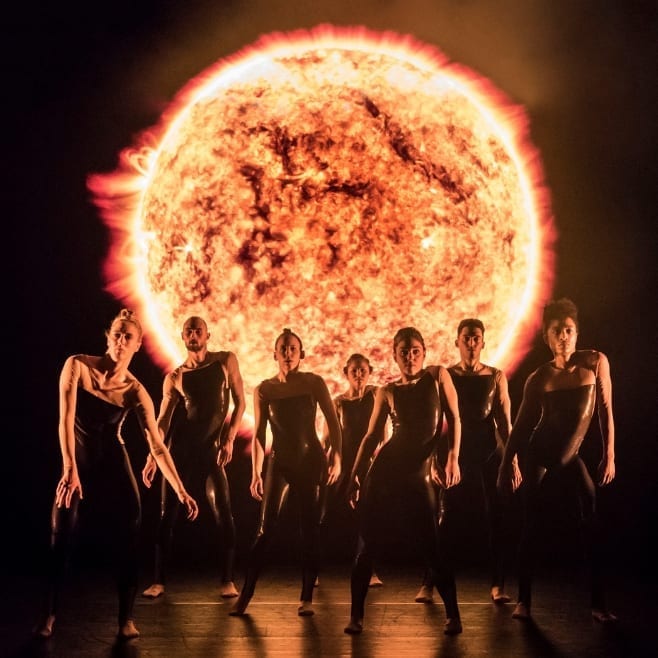 Comedy, dance and performance art are a big part of IF Oxford, the new science and ideas festival that runs across the city from 12-22nd October.

Comedian and broadcaster Rosie Wilby presents highlights from her comedy show ‘Is Monogamy Dead’ with accompanying talk and discussion, and reveals the results of her online survey asking what counts as cheating. The intimate setting of The Bullingdon (7 pm Wed 17 October) promises an honest, thought-provoking and bittersweet evening, whilst in Waiting for Pavlov (7 pm Sat 13 October), a short two-handed play in St Aldate’s Tavern, written and performed by Irish psychologist Martin O’Neil, highlights developments in psychology and neuroscience with pints of humour. Inspired by the format of Waiting for Godot, this comedy presents big ideas in science into a small space over a few drinks with a large glug of laughter: sceptical Seamus is led by his intuition while philosophical Gerry takes a rational approach as the pair pick apart the nature of the relationship between science and its application in the real world.

There are elements of comedy too in the Science Cabaret in the Wig and Pen on Thursday 18 October which unpicks the idea of whether a little knowledge is a dangerous thing. Featuring Chris Lintott from BBC Sky at Night, Oxford University biologist Alison Woollard, a Royal Institution Christmas Lecturer, and Lucy Rogers from Robot Wars – oh and opinions from the internet which has made all of us experts if only you ask the right question.

If Internet speeds baffle you, then watch out for sunlight as it arrives just eight minutes after leaving our star, travelling the 93 million miles to reach the earth. As part of IF Oxford, this journey through the galaxies is replicated on the stage of Oxford Playhouse in a contemporary hour-long dance show (3 pm & 7.30 pm; Sat 13 October). It’s an unusual and invigorating approach to astrophysics, strikingly presented by the Alexander Whitley Dance Company, which shows the contortions of planets and sunbeams as they travel through space. Taking solar science research from the STFC RAL Space at Rutherford Appleton Laboratory as its starting point, with a score by the electroacoustic music innovator Daniel Wohl and striking backdrop from BAFTA Award-winning visual artist Tal Rosner, ‘8 Minutes’ promises an immersive experience in the heavens.

Frankenstein Reconstructed is another ground-breaking performance presented for IF Oxford. This one-off one-woman show tells a new, unsettling story about science and experimentation.  It is inspired by Mary Shelley’s classic book Frankenstein (the original manuscript of which is on show in The Bodleian as part of Sappho to Suffrage: Women Who Dared) and by the surroundings in which it will be shown: the atmospheric Oxford University Museum of the History of Science, used in the 17th-century as a chemical laboratory and for anatomical investigation.

Since the publication of the novel, even the word ‘Frankenstein’ has lived on in our cultural imagination, attaching itself to all kinds of new science including genetic engineering, IVF, Artificial Intelligence, and provoking legitimate questions around not only whether we can make certain things happen, but whether we should. ‘Frankenstein Reconstructed’ draws on research from a wide array of sources, including expert- and first-hand witness accounts of early electricity, arctic exploration, as well as romantic literature. And in the basement gallery itself, exhibits relating to chemistry and early electricity provide the perfect historical context.

Designed for inquisitive minds of all ages and taking a broad approach to science and society, the festival includes both cutting-edge research and investigation from world-leading academics and business alongside a refreshing new approach to ideas about the world at large, knitting the boundaries of traditional academic disciplines.

Other performance events during If Oxford includes:

– Breaking the Rules in Research Writing (and Dance)
Saturday 13 October: 2.45-3.30pm Oxford Town Hall (pre-booking required)
Juliet Henderson, a lecturer at Oxford Brookes with an interest in communication and language is interested in the style, dynamics and movement of language which have real parallels in physical movement and dance. Her talk is accompanied by a performance ‘Random Variable’ by Oxford’s Butoh Dance group, Café Reason, whose highly-stylised Japanese dancing is a perfect reflection of this: developed after WW2 it challenged the restraints and social conventions of traditional and contemporary Japan

– Hertz
Sunday 14 October: 12.30 pm, 2 pm, 3.30 pm Oxford Town Hall (pre-booking recommended)
Listen to the imperceptible soundtrack of the city in real time, and the secret songs of the stars above as their harmonics generate visual patterns as an immersive artwork developed by artist Juliet Robson with a meteorologist, a mathematician and an astronomer.

– Poetry of Science
Saturday 13 October: 12.30-1.30 pm Oxford Town Hall (pre-booking required)
From acrostic and shape poems to sonnets, there are endless forms of poetry to suit the myriad of topics in Science: poems for the 2018 festival are presented by the finalists of the IF Oxford Poetry of Science Competition, Erica McAlpine from Oxford University and Niall Munro from The Oxford Brookes Poetry Centre.

– Unkindest Cut – Harm and Harmony in your Head
Wednesday 17 – Sunday 21 October: 11 am, 12.30, 2 pm, 6 pm Bonn Square (pre-booking recommended) Much closer to home is the choreography within our skulls, captured for IF Oxford in a temporary venue on Bonn Square. Outside it seems to be a shipping container much like any other. Inside though, it’s a fortress of ideas – intimate and intense, alluring but alarming, contained yet spilling over. Unkindest Cut confines and entwines dance, performance, text, film and an intricate light installation to explore how our own minds cope – and sometimes don’t – with modern life, confronting you at close quarters with complex issues around young people and mental health. It integrates young voices and stories into the heart of the work inviting you into a world that is emotionally rich, dark, captivating and sensitive landscape of experiences that are emotionally charged and thought-provoking.